Foundress of the Abbey of Regina Laudis 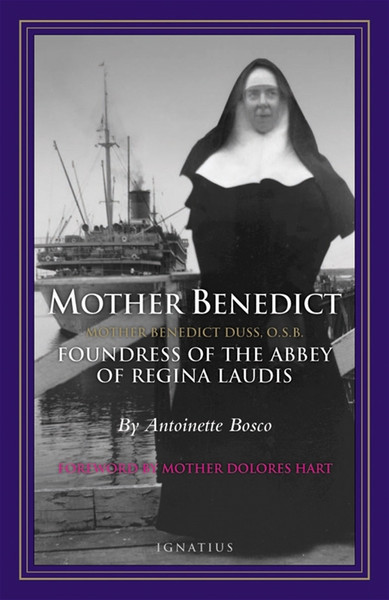 This is the inspiring story of Mother Benedict Duss and the famous Benedictine monastery she founded in Bethlehem, Connecticut, the Abbey of Regina Laudis, a large flourishing community of contemplative Benedictine nuns.

The Abbey is home to many accomplished women from all walks of life and fields of study. Perhaps the most famous is former Hollywood film star, Dolores Hart, who shocked the film world when she left a successful movie career at the age of 25 to become a contemplative Benedictine.

The heart of this book is the amazing story of Mother Benedict Duss, who was born in America but went to France and became a medical doctor in Paris, but left that profession to become a Benedictine contemplative. Through the liberating efforts from Hitler's Nazi regime by Patton's army in France, she felt an overwhelming interior call to return to America to found the first community of contemplative Benedictine nuns. At the young age of 35, with incredible faith, courage and the help of Popes, politicians, famous writers, and many others, she persevered in her call.
Lavishly illustrated with photos.

Antoinette Bosco has done it again! In this book she uses her outstanding talents to tell the remarkable story of Mother Benedict, Sorbonne educated medical doctor who founded the Abbey Regina Laudis in Bethlehem, CT. However, this isn't just "another autobiography", it is a terrific reporter's look at a special community of nuns who are contemporary but true to the centuries old Rule of St. Benedict in their vocation. And we find some great vocation stories along the way - the once Hollywood star turned coffin maker or the former state legislator. Mother Benedict is filled with faith, hope and love!
—Dennis W. Heaney, President The Christophers

p>If you are looking for a good read, a spiritual banquet of delight, look no further. Antoinette Bosco, using her magical writing skills, has served up a series of stories about women who have interacted with God in mysterious ways. Following in the footsteps of their foundress, who was played by Loretta Young in the movie, Come To the Stable, these exquisite women reveal the true meaning of holiness in today's world. A must read for anyone trying to understand how God calls us to loving service, without taking our freedom away.
—Father John Catoir

In Mother Benedict, Antoinette Bosco gives the reader a powerful profile of a pioneering Benedictine nun whose devotion to God and to her vocation is evident on every page. The chapters on her escape from the Nazis and her encounters with the men who would become Pope John XXIII and Pope Paul VI provide fascinating glimpses into her strength of character and her single-minded dedication to serve God at every turn. Mother Benedict spans the arc of the Church's life from the early 20th century, through World War II, and into the post-Vatican II years to today.
—Tim S.Hickey, Editor-Columbia Magazine/Knights of Columbus

p>How we wish all nuns after Vatican II would have traditional virtues and perennial Catholic wisdom but also be wise, creative, and free spirited. If you are such a reader you will want to read Mother Benedict: Foundress of Regina Laudis to see how these virtues grew amidst the struggles of World War II and how they followed her into the difficult vocation of founding a contemplative Benedictine monastery for women. Antoinette Bosco's account is fast-moving and inspiring.
—Ronda Chervin, Ph.D. professor of philosophy, Catholic writer and speaker. p>Antoinette Bosco has told me many times of her visits to Regina Laudis -- of the friendships and inspiring atmosphere she found there. This book surely was a labor of love! She writes, 'At Regina Laudis I have experienced a joy not often found in this world.' This biography of the abbey's foundress naturally becomes a history of the abbey itself. Of course, key issues in contemporary religious life are not avoided. Readers particularly will enjoy the compelling story of Mother Duss' life as a young nun in occupied France and of the major figures of modern church history she encountered as the road to America unfolded for her.
—David Gibson, editor of Origins, CNS Documentary Service

If you read only one book this year, make it Mother Benedict. More than a biography, Antoinette Bosco has written an inspirational epic-a fascinating look at a true Catholic heroine-Mother Benedict Duss. In this sweeping saga of faith, hardship, and courage, Bosco not only gives readers a portrait of an extraordinary woman and her struggles to found a contemplative order-the first in America-but she also captures the essence of the Abbey of Regina Laudis itself,and the captivating stories of the people, both celebrity and common man, who have passed through it's gates.
—Allia Zobel Nolan, author of The Worrywart's Prayer Book , Senior Editor Religious Book, Reader's Digest.

p>Vatican II had a message for religious: Return to the spirit of your founders and foundresses. Certainly Lady Abbess Benedict Duss, O.S.B. did that. As was true for St. Benedict, troubles beset her from within and without. Through suffering, and though take back responses, challenges, and what would appear as unreasonable demands, she never wavered from the vision that became clear to her and was symbolized by the star on the jeeps of General Patton's army and later built into the floor of the chapter room at Regina Laudis.
Always pointing to Christ she said of Him and of those called to be His spouses, that this way of life is to embrace the cross, that this way of life is a contradiction to the world.
From my experience with Lady Abbess and the Nuns who have been drawn to the Abbey she founded in the United States of America, I can enthusiastically endorse this gripping account as related by Antoinette Bosco.
—Rev. Douglas Mosey, President-Rector, Holy Apostles College and Seminary.