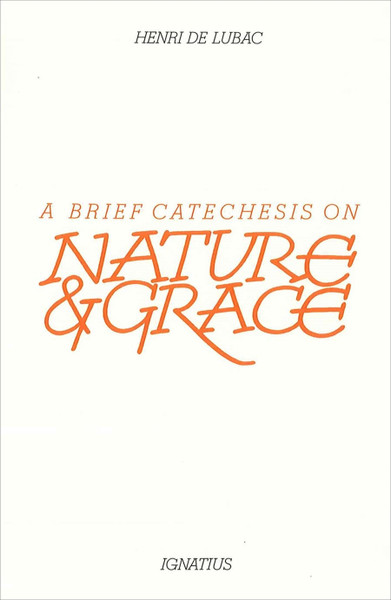 The great twentieth-century theologian Henri de Lubac sought in this work to clarify the relationship between nature and grace, a relationship he thought had been greatly misunderstood by certain theologians. De Lubac’s insights revolutionized the modern discussion of nature and grace, and they influenced thinkers such as John Paul II and Benedict XVI, as well as Hans Urs von Balthasar.

This book, written after the Second Vatican Council and toward the end of de Lubac’s long life, summarizes and extends key ideas he sought to recover from the classical sources of early and medieval Christianity. Confronted with distortions of Christian teaching, de Lubac repudiates on the one hand the extreme of radically opposing nature and grace, as if grace were entirely alien to nature, and on the other hand, the extreme of radically confusing them.

A Brief Catechesis on Nature and Grace also contains appendices, including de Lubac’s famous “The Council and the Parachurch”, in which he examines widespread misinterpretations of the Second Vatican Council.

PREFACE
I. Natural and the Supernatural
1. Two Correlative Terms
2. The True Supernatural
3. Adjective or Noun?
4. Admirabile Commercium
5. A Distinction Which Remains

CONCLUSION
APPENDICES
A. The “Supernatural” at Vatican II
B. The “Sacrament of the World”?
C. The Council and the Para-Council
D. The “Cult of Man”: In Reparation to Paul VI

The Catechism of the Catholic Church and the Craft of Catechesis

The Catechism of the Catholic Church and the Craft of Catechesis