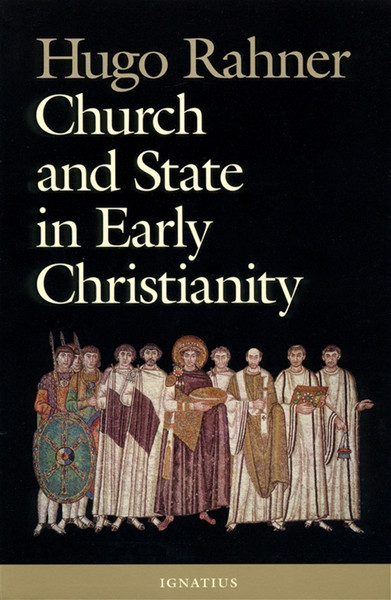 Fr. Hugo Rahner, a renowned church historian, presents for the first time in English a very clear and readable study of the relationship of the Church and State during the first eight centuries. From being persecuted, to tolerated, to being mandated as the Empire's official religion, the Church encountered, during those early centuries, in principle all the forms of the Church-State relationship she could face in the future. With unsurpassed knowledge of the historical sources, Rahner brings to light what the Church herself through the bishops, the Pope, and the great theologians came to understand as the proper relationship between the spiritual society of the Church and the temporal society of the State.

"The relations between private and public orders, between this world and the next, between empires, kingdoms, and Church, between the differing religions and their ways are fundamental in any understanding of human nature and history. Hugo Rahner was one of the most careful and clear writers in this field, a field that ought to be clear before any later understanding of relations between religion and polity can be well and properly clarified and ordered. This is an important contribution not to be neglected by any student of even American government."
-- James V. Schall, S.J., Georgetown University

"Rahner clearly describes the Church/State issues that arose between the second and eighth centuries, and he includes a selection of pertinent primary sources written by bishops, Popes, and theologians during the same time period. These documents are very informative, enabling readers to follow Rahner's insightful commentary more easily."
-- Brian Benestad, University of Scranton

"Hugo Rahner's fine history clearly demonstrates how the Church, from the Apostolic Age to the time of Charlemagne, defended and secured freedom and human rights along with her own independence of temporal power. This is Catholic history as it ought to be written by Catholics."
-- Warren Carroll, Author, A History of Christendom

Church and State in Early Christianity