Roman Catholics in the United States - Revolution and Early Republic 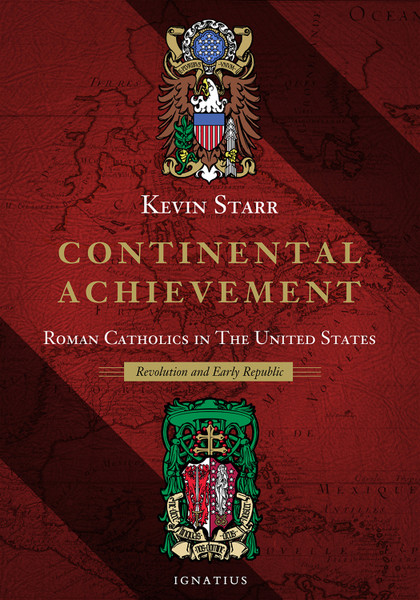 In Continental Ambitions: Roman Catholics in North America , the first volume of Kevin Starr's magisterial work on American Catholics, the narrative evoked Spain, France, and Recusant England as Europeans explored, evangelized, and settled the North American continent. In Continental Achievement: Roman Catholics in the United States, the focus is on the participation of Catholics, alongside their Protestant and Jewish fellow citizens, in the Revolutionary War and the creation and development of the Republic.

With the same panoramic view and cinematic style of Starr's celebrated Americans and the California Dream series, Continental Achievement documents the way in which the American Revolution allowed Roman Catholics of the English colonies of North America to earn a new and better place for themselves in the emergent Republic. John Carroll makes frequent appearances in roles of increasing importance: missionary, constitution writer for his ex-Jesuit colleagues, prefect apostolic, controversialist and defender of the faith, bishop, founder of Georgetown, Cathedral developer, archbishop and metropolitan, and negotiator with the Court of Rome. In him, the Maryland ethos regarding Roman Catholicism reached a point of penultimate fulfillment.

Starr also vividly portrays other representative personalities in this formative period, including Charles Carroll, the only Catholic to sign the Declaration of Independence; his mother, Elizabeth Brooke Carroll, Sulpician John DuBois, whose escape from France in 1791 was arranged by Robespierre; convert Elizabeth Bayley Seton, founder of the first American sisterhood, the Sisters of Charity;Stephen Moylan, Muster-Master General of the Continental Army; Polish military engineer Thaddeus Kosciuszko; Colonel John Fitzgerald, an aide-de-camp to General Washington; Benedict Flaget, the first Bishop of Bardstown, Kentucky; merchant sea captain John Barry, who fought and won the last naval battle of the war; and William DuBourg, Bishop of Louisiana, who offered a Te Deum in a ceremony honoring General Andrew Jackson after his victory in the Battle of New Orleans. With his characteristic honesty and rigorous research, Kevin Starr gives his readers an enduring history of Catholics in the early years of the United States.

"Kevin Starr's Continental Achievement is itself a glorious achievement. Starr's narrative turns the early years of Catholicism in the United States into a riveting story of rivalry, piety, and ambition. It is a superb introduction to how a global religion made itself in a deeply Protestant republic. It will also stand as an appropriate valedictory for one of our era's most gifted historians."
— John T. McGreevy, Francis A. McAnaney Professor of History, University of Notre Dame

"Kevin Starr's final work displays the magnificent abilities that marked his entire career. This deeply researched and eminently readable volume demonstrates how an unlikely group of former Jesuits, French Sulpicians, and an indomitable woman laid the foundations for American Catholicism. Starr shows how the American Church, equally distrusted by American Protestants and Vatican officials, managed to demonstrate that Catholicism and republicanism could enrich each other."
— Robert M. Senkewicz, Professor Emeritus of History, Santa Clara University

"What a joy to have the final portion of Kevin Starr's epic history of the American Catholic Church, covering the American Revolution and the early days of the Republic. Starr's lively chronicle makes compelling reading on its own, but this book has a special urgency given our current debates about the role of Catholicism in American life. Continental Achievement is a book all U.S. Catholics need to read."
— Dana Gioia, former Chairman of the National Endowment for the Arts