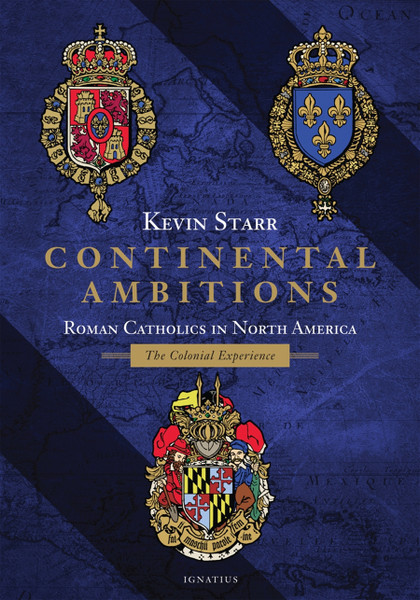 Kevin Starr has achieved a fast-paced evocation of three Roman Catholic civilizationsSpain, France, and Recusant Englandas they explored, evangelized, and settled the North American continent. This book represents the first time this story has been told in one volume. Showing the same narrative verve of Starr's award-winning Americans and the California Dream series, this rivetingbut sometimes painfulhistory should reach a wide readership.

Starr begins this work with the exploration and temporary settlement of North America by recently Christianized Scandinavians. He continues with the destruction of Caribbean peoples by New Spain, the struggle against this tragedy by the great Dominican Bartolom矤e Las Casas, the Jesuit and Franciscan exploration and settlement of the Spanish Borderlands (Florida, Texas, New Mexico, Arizona, Baja, and Alta California), and the strengths and weaknesses of the mission system.

He then turns his attention to New France with its highly developed Catholic and Counter-Reformational cultures of Quebec and Montreal, its encounters with Native American peoples, and its advance southward to New Orleans and the Gulf of Mexico. The volume ends with the founding of Maryland as a proprietary colony for Roman Catholic Recusants and Anglicans alike, the rise of Philadelphia and southern Pennsylvania as centers of Catholic life, the Suppression of the Jesuits in 1773, and the return of John Carroll to Maryland the following year.

Starr dramatizes the representative personalities and events that illustrate the triumphs and the tragedies, the achievements and the failures, of each of these societies in their explorations, treatment of Native Americans, and translations of religious and social value to new and challenging environments. His history is notable for its honesty and its synoptic success in comparing and contrasting three disparate civilizations, albeit each of them Catholic, with three similar and differing approaches to expansion in the New World.

"Continental Ambitions is the book I have been craving for years. It is the first historical study I've ever read that explains my America, in which Catholicism is not marginal and Hispanics are not minor latecomers. Starr's vision is truly continental. For him, the West is not a nineteenth century Yankee frontier but the epic landscape that parallels (and often precedes) Puritan New England as foundational to American identity. Continental Ambitions is not just the history of the Catholic Church in North America but also the untold story of the United States."
— Dana Gioia, Former Chairman, National Endowment for the Arts and Judge Widney Professor of Poetry and Public Culture, University of Southern California

p>"Continental Ambitions represents a major contribution to a fresh perspective on the European making of the New World. Guided by this narrative, we tread in the steps of intrepid men and women and come to measure their convictions and courage."
— Judge John T. Noonan, Jr. United States Court of Appeals for the Ninth Circuit p>"To see in one book the history of Catholics in the New World, its glories and its tragedies, is almost like reading a secret history of a lost tribe. Kevin Starr's magisterial narration of European Catholic presence in North America-the Norse, the Spanish, the French, the English, plus a few others-is a contribution of the first order to our understanding of the whole foundation of this land of the free."
— James V. Schall, S.J. Professor Emeritus, Georgetown University

"Kevin Starr's enthralling Continental Ambitions meticulously narrates the history of Catholicism as North America's first form of Christianity vividly present centuries before the waves of immigration that we typically associate with the formation of the American Catholic community."
— Charlotte Allen, Author, The Human Christ: The Search for the Historical Jesus

p>"These accounts of a human drama heroic and villainous, saintly and sanguineous, are a feast for the historian and, more importantly, food for our generation starved of the story of its own past. The romantic whose knowledge is airbrushed and the cynic whose knowledge is cobbled together with clich‚s will jointly be challenged. For everyone, reading this book could be a transforming experience, and a delight as well."
— Fr. George Rutler, Author, He Spoke to Us: Discerning God in People and Events p>"Many Americans, Catholics among them, know very little about the distinctive Catholic cultures that flourished in North America long before the Pilgrims and the Puritans arrived. Now, thankfully, we have Kevin Starr's scholarly but highly readable Continental Ambitions to fill the knowledge gap. The story it tells is not only fascinating in its own right but illuminating for the light it sheds on issues that remain part of the Catholic experience."
— Russell Shaw, Author, Catholics in America

Our Lady Came to Fatima