A Conference with Pope Benedict XVI 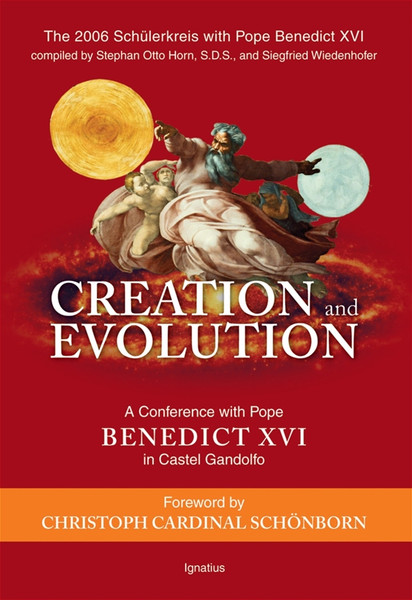 In 2005 the Archbishop of Vienna, Christoph Cardinal Schönborn wrote a guest editorial in The New York Times that sparked a worldwide debate about "Creation and Evolution". Pope Benedict XVI instructed the Cardinal to study more closely this problem and the current debate between evolutionism and "creationism," and asked the yearly gathering of his former students to address these questions.

Even after Joseph Ratzinger became Pope Benedict XVI, he has continued to maintain close contact with the circle of his former students. The "study circle" (Schulerkrers) meets once a year with Pope Benedict XVI for a conference. Many of these former Ratzinger students have gone on to become acclaimed scholars, professors and writers, as well as high ranking Church prelates.

This book documents the proceedings of the remarkable conference on the topic of "Creation and Evolution" hosted by Pope Benedict XVI in 2006 at the papal summer residence, Castel Gandolfo. It includes papers that were presented from the fields of natural science, philosophy and theology, and records the subsequent discussion, in which Pope Benedict XVI himself participated.

"Ultimately it comes down to the alternative: What came first? Creative Reason, the Creator Spirit who makes all things and gives them growth, or Unreason, which, lacking any meaning, strangely enough brings forth a mathematically ordered cosmos, as well as man and his reason. The latter, however, would then be nothing more than a chance result of evolution and thus, in the end, equally meaningless. As Christians, we say: I believe in God the Father, the Creator of heaven and earth. I believe in the Creator Spirit. We believe that at the beginning of everything is the eternal Word, with Reason and not Unreason."
— Pope Benedict XVI

Creation and Evolution is an extraordinary opportunity for the public to listen in on the conversation as some of the greatest minds in the Catholic Church - theologians, philosophers, scientists, and Pope Benedict himself - wrestle with one of the most thorny and far-reaching of topics. Participants clash repeatedly over what we really know about the forces that shaped life on earth, over what is data and what is hype, over what certain scenarios might mean even if they were true. I recommend it to anyone who wants to know where we might have come from and where we might be headed.
- Michael J. Behe, Lehigh University, Author of The Edge of Evolution

"At a time when evolution is the subject of so many bitter polemics, it is refreshing to see theologians and scientists together to engage in respectful, informed, and thoughtful discussion of it."
- Stephen M. Barr, professor of Theoretical Physics, University of Delaware, and author of Modern Physics and Ancient Faith.

A School of Prayer (Digital)

A School of Prayer