With a Short Discourse on Hell 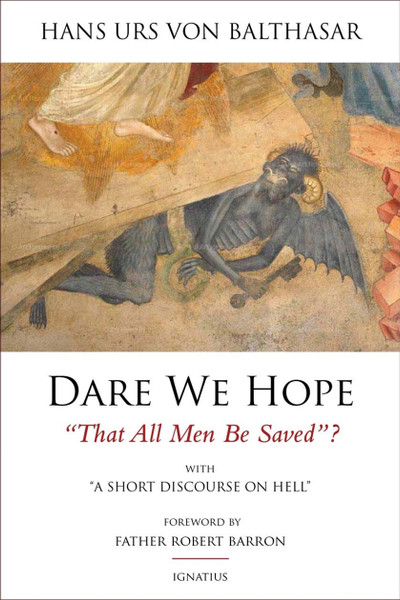 This book is perhaps one of the most misunderstood works of Catholic theology of our time. Critics contend that von Balthasar espouses universalism, the idea that all men will certainly be saved. Yet, as von Balthasar insists, damnation is a real possibility for anyone. Indeed, he explores the nature of damnation with sobering clarity. At the same time, he contends that a deep understanding of God’s merciful love and human freedom, and a careful reading of the Catholic tradition, point to the possibility—not the certainty—that, in the end, all men will accept the salvation Christ won for all. For this all-embracing salvation, von Balthasar says, we may dare hope, we must pray and with God’s help we must work.

The Catholic Church’s teaching on hell has been generally neglected by theologians, with the notable exception of von Balthasar. He grounds his reflections clearly in Sacred Scripture and Catholic teaching. While the Church asserts that certain individuals are in heaven (the saints), she never declares a specific individual to be in hell. In fact, the Church hopes that in their final moments of life, even the greatest sinners would have repented of their terrible sins, and be saved.

Sacred Scripture states, “God ... desires all men to be saved and to come to the knowledge of the truth. For there is one God, and there is one mediator between God and man, the man Christ Jesus, who gave himself as a ransom for all” (1 Tim 2:4–5).

“Truly deep theological questions can rarely be answered with a simple yes or no. Rather, they are approached by the careful theologian, who circles around them, making distinctions, bringing essential aspects to light. The issue of who and how many will be saved is surely one of the thorniest theological puzzles in the Catholic tradition, and I don’t know any theologian—classical or contemporary—who performs the nimble task of bringing out the complexity and profiles of this issue better than Hans Urs von Balthasar. In this short but rich text, you will hear of grace, punishment, mercy, the awful self-absorption of sin—but above all of hope.”
— Fr. Robert Barron, Rector and President, Mundelein Seminary, University of Saint Mary of the Lake