Signs of Transcendence in the Human Story 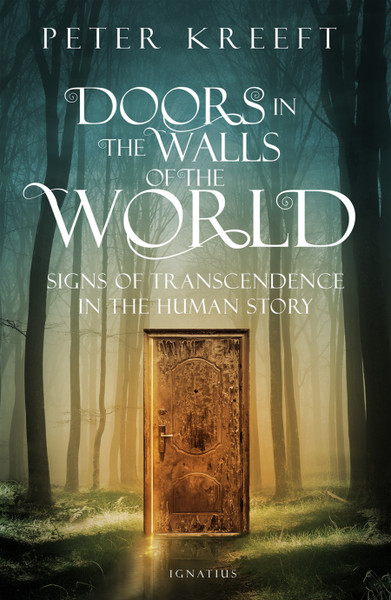 "There are more things in heaven and earth, Horatio, than are dreamt of in your philosophy."— Hamlet

After William Shakespeare's Horatio sees the ghost of Hamlet's father, and scarcely believes his own eyes, Hamlet tells him that there is more to reality than he can know or imagine, including ghosts.

Hamlet's statement suggests that the walls of the material world, which we perceive with our senses and analyze with our intellects, have doors that open into the More beyond them. Philosopher Peter Kreeft explains in this book that the More includes "The Absolute Good, Platonic Forms, God, gods, angels, spirits, ghosts, souls, Brahman, Rta (the Hindu ontological basis for cosmological karma), Nirvana, Tao, 'the will of Heaven', The Meaning of It All, Something that deserves a capital letter."

With razor-sharp reasoning and irrepressible joy, Kreeft helps us to find the doors in the walls of the world. Drawing on history, physical science, psychology, religion, philosophy, literature, and art, he invites us to welcome what lies on the other side so that we can begin living the life of Heaven in the here and now.

"Tragically, one result of the dominant interpretation of reality today is that the world becomes extraordinarily boring. There's no ultimate point to anything. But the Christian vision is entirely different! It tells us that history is in fact His-story, and His story is one that is dramatic, scary, and beautiful beyond imagination. With his characteristic wit and intellect, Peter Kreeft opens our minds and hearts to this exciting and life-changing drama, in which you and I play leading roles."
— Fr. John Riccardo, Author, Heaven Starts Now

"Kreeft fits his reader with the lens of story to see clearly the deeper meanings of life, death, love, sex, poetry, human longing—for starters. This microscopic look at the big picture proves that Plato's Cave not only has an opening, but a system of vents, shafts, and tunnels leading to the light of the Real. Want a wise guide, a Monty Python sketch writer, and clarity-obsessed teacher who distills practical wisdom from wildly eclectic sources? Buy this book, already."
— Patrick Coffin, Host, The Patrick Coffin Show

"Kreeft is ready always to give reasons for the wonder that is in him.  The proper philosophy, the door-flinging-open philosophy, does not reduce my thoughts about God to atoms, but splits the atom and sees in it the fire of God's power and love.  Or, to put it in the words of the Psalmist, 'I rejoiced when I heard them say, Let us go up to the house of the Lord.'"
— Anthony Esolen, Ph.D., Professor of English, Thomas More College

Heart of the World

Joy to the World