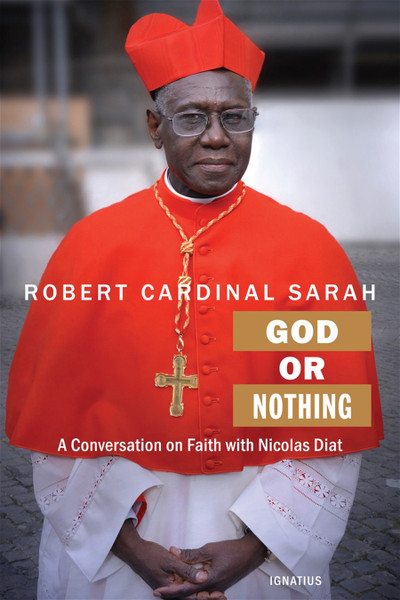 "The idea of putting Magisterial teaching in a beautiful display case while separating it from pastoral practice, which then could evolve along with circumstances, fashions, and passions, is a sort of heresy, a dangerous schizophrenic pathology. I therefore solemnly state that the Church in Africa is staunchly opposed to any rebellion against the teaching of Jesus and of the Magisterium. . . . The Church of Africa is committed in the name of the Lord Jesus to keeping unchanged the teaching of God and of the Church."
— Robert Cardinal Sarah

In this fascinating autobiographical interview, one of the most prominent and outspoken Catholic Cardinals gives witness to his Christian faith and comments on many current controversial issues. The mission of the Church, the joy of the gospel, the “heresy of activism”, and the definition of marriage are among the topics he discusses with wisdom and eloquence.

Robert Cardinal Sarah grew up in Guinea, West Africa. Inspired by the missionary priests who made great sacrifices to bring the Faith to their remote village, his parents became Catholics. Robert discerned a call to the priesthood and entered the seminary at a young age, but due to the oppression of the Church by the government of Guinea, he continued his education outside of his homeland. He studied in France and nearby Senegal. Later he obtained a licentiate in theology at the Pontifical Gregorian University in Rome, followed by a licentiate in Sacred Scripture at the Studium Biblicum Franciscanum of Jerusalem.

At the age of thirty-four he became the youngest Bishop in the Catholic Church when John Paul II appointed him the Archbishop of Conakry, Guinea, in 1979. His predecessor had been imprisoned by the Communist government for several years, and when Archbishop Sarah was targeted for assassination John Paul II called him to Rome to be Secretary of the Congregation for the Evangelization of Peoples. In 2010 Pope Benedict XVI named him Cardinal and appointed him Prefect of the Pontifical Council Cor Unum. Pope Francis made him Prefect of the Congregation for Divine Worship and the Discipline of the Sacraments in 2014.

"I have read God or Nothing with great spiritual profit, joy, and gratitude. . . .[Its] courageous answers to the problems of gender theory clear up in a nebulous world a fundamental anthropological question."
— Pope Emeritus Benedict XVI

"There's an 'African moment' unfolding in Catholicism, and Cardinal Robert Sarah is among its most important voices. If you want to understand the forces shaping the Church’s future, you need to read this book."
— John L. Allen, Associate Editor, Crux/Boston Globe

"A remarkable testimonial of the Catholic faith in the face of many serious contemporary challenges."
— Raymond Cardinal Burke, Patron of the Sovereign Military Order of Malta

"A clear and firm defense of Catholic doctrine on marriage and the family."
— Walter Cardinal Brandmüller, President Emeritus of the Pontifical Committee for Historical Sciences

"Cardinal Sarah reflects on the urgent question of God, who is becoming the 'Great Absent One' for too many people."
— Daniel Cardinal DiNardo, Archbishop of Galveston-Houston

"No one reading this magnificent book of Cardinal Robert Sarah, a true witness of a Church marked in its history by severe persecution, cannot but be fascinated by his profound faith in Jesus Christ. . . . [The] mission countries have themselves become an invaluable source of evangelization and inspiration for the lands from which its missionaries originally came."
— Most Reverend Carlo Maria Viganò, Apostolic Nuncio to the United States

"Cardinal Sarah shows a deep love for the Gospel, a pastor's heart for the poor, and a clear vision of the challenges that the Church faces in the post-modern world. He is an important guide for our mission of the new evangelization."
— Most Reverend José H. Gomez, Archbishop of Los Angeles

"The seed of the Gospel sown in the earth of Africa produces a rich harvest! Cardinal Sarah addresses contemporary challenges with intellectual depth and spiritual insight."
— Most Reverend Salvatore Cordileone, Archbishop of San Francisco

"An essential read for any person seeking an authentic witness to Christ in modern society."
— Most Reverend Samuel Aquila, Archbishop of Denver

"In a breathtaking way, Cardinal Sarah quotes and incarnates the wisdom of Pope Benedict: 'Ideologues will not save the world but rather, the saints and their great, gentle insights.' "
— Father George W. Rutler, Author, Hints of Heaven

"Sarah's clear and bold comments about the need for a profound renewal in the Church are truly refreshing and encouraging."
— Father Gerald E. Murray, J.C.D.

God Is No Delusion (Digital)

The Power of Silence (Digital)