A Novel about St. Catherine of Siena 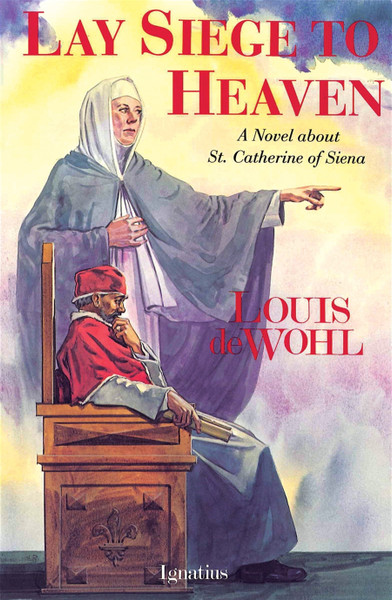 Continuing his popular series of novels about saints of the Church, de Wohl devotes his considerable talents to an interpretation of one of the most unusual women of all time, Saint Catherine of Siena. The daughter of a prosperous dyer in fourteenth-century Siena, Catherine never forgot the mystical experience of her extreme youth; at that time she devoted herself to Christ. It was, however, a shock to her family when, refusing marriage, she insisted on giving her life totally to God.

Her career was extraordinary. In that confused and dangerous era of history, the Pope was living at Avignon: Catherine persuaded him to return to Rome. The City-States of Italy were at war with each other: Catherine subdued them. There was pestilence: Catherine served and saved. She performed miracles, she received the stigmata, she drew about her a crowd of devoted men and women.

A saint who would not let the Lord God alone, she really did lay siege to heaven-and changed the face of her world. This novel, which is also a vivid biography, brings Catherine of Siena to life in a remarkable way. She lives on every page.

"This novel artfully combines solid historical scholarship with lively dialogues, and sheds light on the greatness and sublimity of the woman's mission in the Church. The fact that an untutored woman gained power over Popes and political events by identifying her will with God's will, manifests eloquently that real strength i.e. supernatural strength comes from the joyful acceptance of one's 'nothingness.' Humility, charity, prayer and sacrifice not scholarship taught Catherine true theology, and made her a Doctor of the Church. This book can teach a lot to modern scholars and to women seeking liberation."
-Alice von Hildebrand, Author, By Love Refined

"These pages positively glow with de Wohl's discovery of history's public secret: there is no life more human than the supernatural life of a saint and no romance greater than the struggle to love only what God loves."
-Fr. George Rutler, Author, Seven Ages of Man