The American Betrayal of Ngo Dinh Diem, President of Vietnam 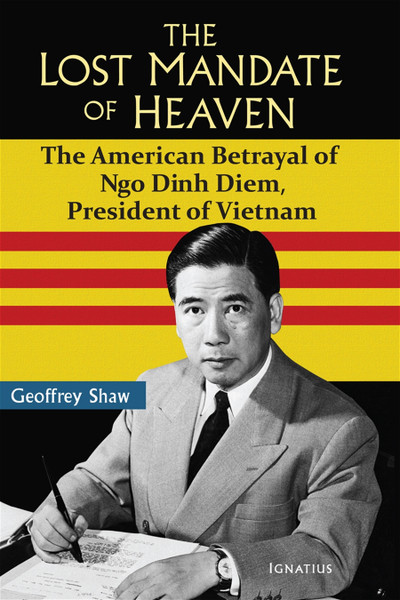 Ngo Dinh Diem, the first president of the Republic of Vietnam, possessed the Confucian "Mandate of Heaven", a moral and political authority that was widely recognized by all Vietnamese. This devout Roman Catholic leader never lost this mandate in the eyes of his people; rather, he was taken down by a military coup sponsored by the U.S. government, which resulted in his brutal murder.

The commonly held view runs contrary to the above assertion by military historian Geoffrey Shaw. According to many American historians, President Diem was a corrupt leader whose tyrannical actions lost him the loyalty of his people and the possibility of a military victory over the North Vietnamese. The Kennedy Administration, they argue, had to withdraw its support of Diem.

Based on his research of original sources, including declassified documents of the U.S. government, Shaw chronicles the Kennedy administration's betrayal of this ally, which proved to be not only a moral failure but also a political disaster that led America into a protracted and costly war. Along the way, Shaw reveals a President Diem very different from the despot portrayed by the press during its coverage of Vietnam. From eyewitness accounts of military, intelligence, and diplomatic sources, Shaw draws the portrait of a man with rare integrity, a patriot who strove to free his country from Western colonialism while protecting it from Communism.

"A candid account of the killing of Ngo Dinh Diem, the reasons for it, who was responsible, why it happened, and the disastrous results. Particularly agonizing for Americans who read this clearly stated and tightly argued book is the fact that the final Vietnam defeat was not really on battle grounds, but on political and moral grounds. The Vietnam War need not have been lost. Overwhelming evidence supports it."
- From the Foreword by James V. Schall, S.J., Professor Emeritus, Georgetown University

"Did I find a veritable Conradian 'Heart of Darkness'? Yes, I did, but it was not in the quarter to which all popular American sources were pointing their accusatory fingers; in other words, not in Saigon but, paradoxically, within the Department of State back in Washington, D.C., and within President Kennedy's closest White House advisory circle. The actions of these men led to Diem's murder. And with his death, nine and a half years of careful work and partnership between the United States and South Vietnam was undone."
- Geoffrey Shaw, from the Preface

"This masterpiece will likely emerge as the definitive work on this troublesome subject. An exceedingly well-written and engaging read, replete with significant revelations and exposés."
— William L. Stearman, Ph.D.,Director of the National Security Council's Indochina staff, 1973–1976

p>"A remarkable book that finally sets the record straight with copious documentation on the assassination of Diem, which was ultimately responsible for our loss of the war. A must read."
— Admiral John M. Poindexter, U.S. Navy (ret.), National Security Advisor to President Reagan p>"Shaw has produced a truly monumental and highly readable account. Any serious student of the Vietnam War must read this book."
— Colonel Andrew R. Finlayson, U.S. Marine Corps (ret.), Author, Killer Kane p>"It took half a century for someone committed and brave enough to unravel the Machiavellian plot to assassinate President Diem."
— Nghia M. Vo, Director of Saigon Arts, Culture, and Education Institute (SACEI)

"Amidst a new time of national strategic misdirection and hubris, the case of Diem demands to be revisited. This book is essential reading."
— Thomas A. Marks, Ph.D., Author, Maoist People's War in Post-Vietnam Asia

The Lost Mandate of Heaven