Discovering God Amidst the Rwandan Holocaust 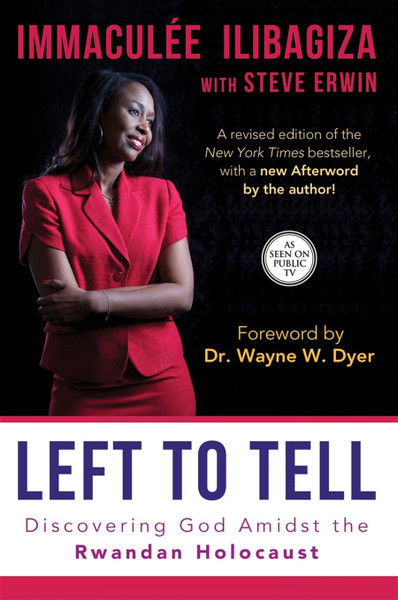 New revised edition, now with an afterword by the author!

In the spring of 1994, more than one million people were murdered in the Rwandan genocide. This is the story of how Immaculee survived certain death, along with seven other women, by hiding in a very small bathroom for more than 3 months. Day after day, for months, the killers would search nearby – gleefully chanting “kill them big, kill them small, kill them, kill them, kill them all!”

With uncommon sincerity, Immaculee shares with us her soul's struggle through disbelief to anger and rage and, ultimately, forgiveness. She is living proof of the power of prayer and positive thinking.Her story will touch you deeply. You will feel her fear, you will cry, and you will ask yourself the same questions that we as a people have been asking forever: How could this happen? Where does such animosity come from? Why can't we just be like God, Who is the Source for all of us? But you will also feel something else most profoundly: You will feel hope, a hope that inch by inch, we as a people are moving toward a new alignment—that is, we're moving toward living God-realized lives. Illustrated

"In 1994, Rwandan native Ilibagiza was 22 years old and home from college to spend Easter with her devout Catholic family when the death of Rwanda's Hutu president sparked a three-month slaughter of nearly one million ethnic Tutsis. She survived by hiding in a Hutu pastor's tiny bathroom with seven other starving women for 91 cramped, terrifying days. This searing firsthand account of Ilibagiza's experience cuts two ways: her description of the evil that was perpetrated, including the brutal murders of her family members, is soul-numbingly devastating, yet the story of her unquenchable faith and connection to God throughout the ordeal uplifts and inspires. This book is a precious addition to the literature that tries to make sense of humankind's seemingly bottomless depravity and counterbalancing hope in an all-powerful, loving God." - Publisher's Weekly, Starred Review, March 2006

Tell Me About The Catholic Faith