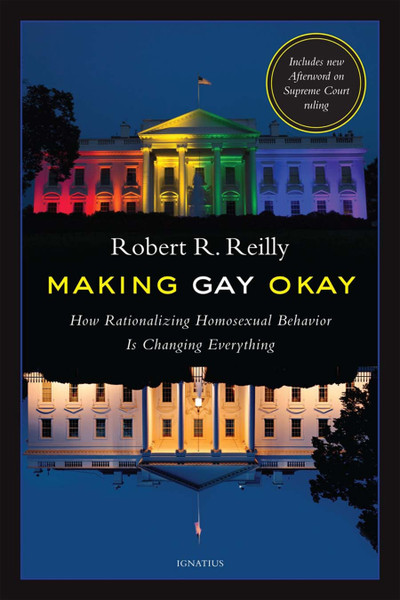 Why are Americans being forced to consider homosexual acts as morally acceptable? Why has the US Supreme Court discovered a constitutional right to same-sex "marriage", which until a decade ago, was unheard of in the history of Western or any other civilization? Where has the "gay rights" movement come from, and how has it so easily conquered America?

The answers are in the dynamics of the rationalization of sexual misbehavior. The power of rationalization—the means by which one mentally transforms wrong into right—drives the gay rights movement, gives it its revolutionary character, and makes its advocates indefatigable. The homosexual cause moved naturally from a plea for tolerance to cultural conquest because the security of its rationalization requires universal acceptance. In other words, we all must say that the bad is good.

At stake in the rationalization of homosexual behavior is reality itself, which is why it will have consequences that reach far beyond the issue at hand. Already America's major institutions have been transformed—its courts, its schools, its military, its civic institutions, and even its diplomacy. The further institutionalization of homosexuality will mean the triumph of force over reason, thus undermining the very foundations of the American Republic.

"If you read only one book on homosexuality, natural law theory, and the radical changes now being instituted within our culture, let it be this one!

Reilly exposes the unscientific reasons why homosexuality was normalized in the [American Psychiatric Association] diagnostic manual. He offers us some intriguing new material. In a clear, systematic, and engaging style, Reilly show us the inherent futility of same-sex acts, and eloquently explains what marriage really is. This book should be required reading for anyone who writes our laws-in fact, for anyone with cultural decision-making power. We must not allow the surging political tides to obscure what you and I ‘can't not know' about the nature and purpose of sexuality."
- Joseph Nicolosi, PhD, Co-Founder, National Association for Research and Therapy of Homosexuality (NARTH)

p>"Reilly has drawn on his extensive knowledge of classical political philosophy to explain the full scope of the dangers inherent in the modern homosexual rights movement. The movement threatens our very understanding of human nature, and hence of the American political regime that derives its understanding of rights and legitimate government from that nature. This book is a stark warning that should be read by every lover of liberty, and a call to action for those who would preserve it."
- John C. Eastman, JD, PhD Chairman, National Organization for Marriage Founding Director, Claremont Institute Center for Constitutional Jurisprudence

"This book is magnificent, a real achievement. For anyone interested in taking our country back from the sexual radicals, you must know how they did it, so rapidly, efficiently, even brutally. The gay rights movement slid through American institutions, both public and private, like a hot knife through butter. I suspect it has surprised even its proponents to see how fast we have capitulated. First philosophy fell, then psychology, the courts, education, the military and even the Boy Scouts followed. No one has told both the broad sweep and the specific details of this story better than Robert Reilly."
- Austin Ruse, President, Catholic Family and Human Rights Institute

p>"In our society, homosexuality has become more than a ‘sexual orientation'. It has now grown into a far-reaching movement seeking to redefine not only morality, but ideas about biology, human nature, law, and politics-indeed, to declare opposing views as beyond the pale of civilization. Robert Reilly has the multiple talents necessary to address the full range of relevant issues, from the philosophical to the practical. A rare tour de force on a defining question of our time."
- Robert Royal, PhD President, Faith & Reason Institute p>"Robert Reilly shows that to go with the flow of the homosexual movement is to go against nature, science, children, marriage, the family and the common good; in fact to go against common sense. This movement is now the leader of a long-term pack working to undermine society, a process designed to bring chaos (see Gramschi) and dictatorship before freedom is enjoyed again. The time and the means to oppose are both narrowing. If this book does not move you to action nothing will."
- Patrick F. Fagan, Ph.D., Senior Fellow, Family Research Council

"The important contribution of Reilly´s book is explaining the background of the philosophic premises of the relevant Supreme Court cases. What drives those cases is not law, but ideology. This book effectively exposes that ideology."
- John S. Baker, JD, PhD Professor Emeritus, Louisiana State University Law School

p>"Plato teaches that societies take on the features and tastes of the persons most prominent in them. Reilly shows how America's ruling class is shaping our society according to its taste for homosexuality and its distaste for natural families. If you want to know the philosophical and legal background of the revolution that is being imposed upon America-and its consequences-read this book."
- Angelo M. Codevilla , PhD  Professor Emeritus, Boston University; Author, The Character of Nations p>"The mainstreaming of sodomistic practice is a sign that a culture has lost not only its faith but also its mind. Robert Reilly patiently and convincingly explains how that flight from reason occurred and what can be done about it."
- Charles E. Rice, JD, JSD Professor Emeritus of Law, University of Notre Dame Law School

"Robert Reilly is to be admired for tackling such an explosive topic with reason, balance, aplomb, and moral clarity. He shows how the rationalization of homosexual behavior has worked its way into the nooks and crannies of our public life-from parenting to foreign policy-and will be our culture's undoing if the current trend is not reversed. I hope that the compelling arguments in this book can play a key role in that reversal."
- Jay W. Richards, PhD  Author, New York Times bestselling books Indivisible and Infiltrated

p>"Robert Reilly is a true Renaissance man, an expert in music, Islam, and cinema. In this work he explains how the acceptance of the rationalization for homosexual behavior may bring down our culture and society unless it is exposed, understood, and opposed.
- Fr. C. John McCloskey, Co-Author, Good News, Bad News p>"A stiff brush against the fur of today's judicial and journalistic 'wisdom'. Read -- and argue."
- Michael Novak, American Enterprise Institute