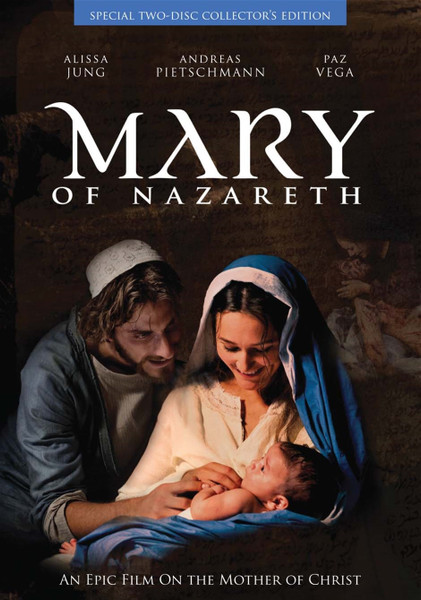 This DVD can only be sold in the US, Canada and Mexico.

Mary of Nazareth is an epic motion picture on the life of Mary, mother of Christ, from her childhood through the Resurrection of Jesus. Shot in High Definition, it was filmed in Europe with outstanding cinematography, a strong cast, and a majestic music score. Actress Alissa Jung gives a beautiful, compelling and inspired portrayal of Mary.

The film vividly captures the essence of Mary’s profound faith and trust in God amidst the great mysteries that she lived with as the Mother of the Messiah, as well as her compassionate humanity and concern for others, and the deep love that she and Jesus shared for one another. The movie underscores her special role in God’s plan for our redemption, her unique relationship with Christ, and the tremendous suffering that she endured in union with his passion and death, as well as her serene joy at his Resurrection.

After viewing this movie, Pope Benedict XVI said: “ Mary of Nazareth is the woman of a full and total ‘Here I am’ to the Divine Will. In her ‘yes’, even when faced with the loss of her Son, we find complete and profound beatitude.”

In English with Spanish and English subtitles.

WARNING: DVDs are licensed for home use only. It is illegal to show this movie in a public setting such as a church, school or organization's hall without a Site License. That applies even if you are not charging admission. For more information and to obtain a Mary of Nazareth Site License, please go to www.MaryFilm.com or email or call Diane direct at 734-455-1973 or toll free at 1-866-431-1531 x 5.

"The most stunning portrayal of the Virgin Mary on film. A masterpiece!"
- Fr. Donald Calloway, MIC

Mary of Nazareth captivated me from the first scene to the last."
- Johnnette Benkovic, Women of Grace