An Atheist Academic Lays Down Her Arms 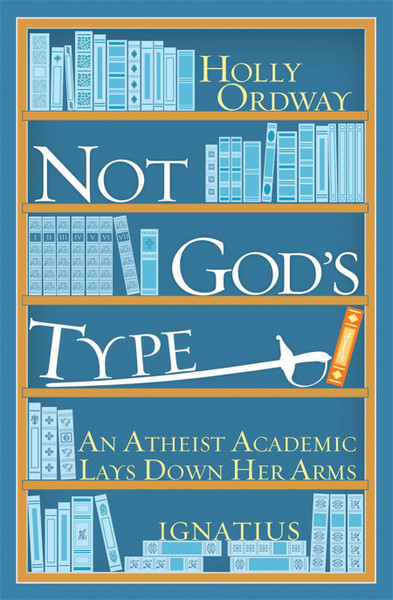 This is the story of a glorious defeat.

Ordway, an atheist academic, was convinced that faith was superstitious nonsense. As a well-educated college English professor, she saw no need for just-so stories about God. Secure in her fortress of atheism, she was safe (or so she thought) from any assault by irrational faith.

So what happened? How did she come to ಜlay down her armsಝ in surrender to Christ and then, a few years later, enter the Catholic Church?

This is the moving account of her unusual journey. It is the story of an academic becoming convinced of the truth of Christianity on rational grounds but also the account of Godಙs grace acting in and through her imagination.

It is the tale of an unfolding, developing relationship with God told with directness and honesty and of a painful surrender at the foot of the Cross. It is the account of a lifelong, transformative love of reading and the story of how a competitive fencer put down her sabre to pick up the sword of the Spirit.

Above all, this book is a tale of grace, acting in and through human beings but always issuing from God and leading back to Him. And it is the story of a woman being brought home.

"Moving from unbelief, to Evangelicalism, and finally home to the Catholic Church, Professor Holly Ordway reveals how a gifted mind, longing for transcendence, can only appropriate it if it is wholly given by the reach and power of God's grace."
— Francis J. Beckwith, Professor of Philosophy and Church-State Studies, Baylor University

p>"Holly Ordway manages to dig into meaty intellectual topics without losing the personal, relatable elements of her story. The result is a book that has the rare combination of being both deeply intellectual and deeply human."
— Jennifer Fulwiler, Author, Something Other Than God p>"Holly is living proof that C.S. Lewis was right when he said that a good atheist can't be too careful of her reading. A lover of the word, she discovered through it the love of the Logos, whose beauty fills all of creation. She found the courage to follow the spilled drops of human imagination back to the One who ‘reflects the glory of God and bears the very stamp of his nature, upholding the universe by his word of power' (Heb 1:3)."
— Mark P. Shea, Author, By What Authority? An Evangelical Discovers Catholic Tradition

"Dr. Ordway's wonderful journey of faith shows us the necessity of engaging both the mind and the imagination when presenting the Gospel to a secular world. Never before have I read an author who could artfully weave together the philosophical arguments for the existence of God, the historical evidence for Christ's resurrection, and the case for the Catholic Church all within a heartfelt narrative that was so good I read it in one sitting."
— Trent Horn, Author, Answering Atheism

p>"A fascinating and compelling narrative; a story of discovery, adventure and eventual homecoming, all told with verve and honesty. Holly bears witness to the way in which great literature does not simply entertain or edify us, it can also bring us true revelation and renewal."
— Malcolm Guite, Girton College, Cambridge p>"Not only is this testimony of faith beautifully written, it is a compelling story of what a precocious child and a young atheist actually thought. In the end, her passionate commitment to truth and beauty, especially through the great literature she read, won out, and Holly gave in to the One in whom are hidden all the treasures of wisdom and truth."
— Dr. Robert Sloan, President , Houston Baptist University