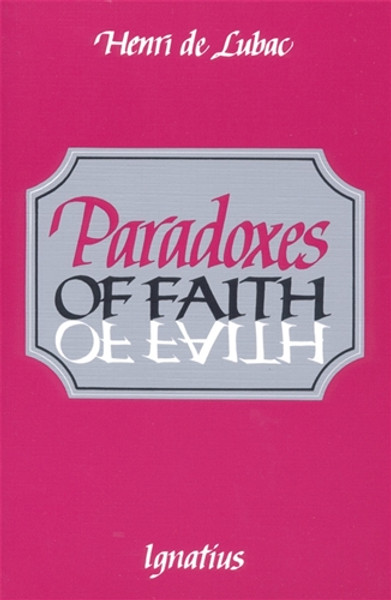 These profound pieces are the fruit of Cardinal Henri de Lubac's lifelong study of the paradoxes of the Christian faith. They are rich and thought-provoking gems, spiritual aphorisms, and meditative reflections, which explore the incongruities and the challenges of the spiritual life.

De Lubac’s magnificent language, clarity, spiritual understanding, and shrewd discernment are on display in every chapter, as he discusses a variety of topics including Christian witness, incarnation, suffering, and faith. His mastery of the subjects is the result not only of intellectual study but of a life lived for Christ even in the darkest of times, as when he participated in the underground resistance to the Nazi occupation of France.

A leader in nouvelle théologie, an intellectual movement characterized by interest in the Fathers of the Church and the concerns of contemporary men and women, de Lubac was named a cardinal by Pope John Paul II.

"The very word paradox is paradoxical. Let the paradox be. Remember, after all, the Gospel is full of paradoxes, that man is himself a living paradox, and that according to the Fathers of the Church, the Incarnation is the supreme Paradox."
-- Henri de Lubac, from the Preface

Great Hymns of the Faith