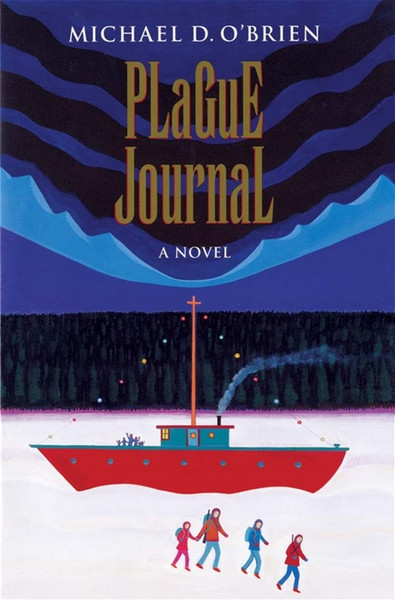 Plague Journal is Michael O'Brien's third novel in the Children of the Last Days series. The central character is Nathaniel Delaney, the editor of a small-town newspaper, who is about to face the greatest crisis of his life. As the novel begins, ominous events are taking place throughout North America, but little of it surfaces before the public eye. Set in the not-too-distant future, the story describes a nation that is quietly shifting from a democratic form of government to a form of totalitarianism. Delaney is one of the few voices left in the media who is willing to speak the whole truth about what is happening, and as a result the full force of the government is brought against him.

Thus, seeking to protect his children and to salvage what remains of his life, he makes a choice that will alter the future of each member of his family and many other people. As the story progresses he keeps a journal of observations, recording the day-by-day escalation of events, and analyzing the motives of his political opponents with sometimes scathing frankness. More importantly, he begins to keep a "mental record" that develops into a painful process of self-examination. As his world falls apart, he is compelled to see in greater depth the significance of his own assumptions and compromises, his successes and failures. Plague Journal chronicles the struggle of a thoroughly modern man put to the ultimate spiritual and psychological test, a man who in losing himself finds himself.

"He's done it again! Tugged at our hearts, challenged our minds, and revived our spirits. A novel about despair, doubt, love, and holiness,Plague Journal will open you to new levels of commitment to the interior battle to love when love comes hardest. Bravo!"
-Ronda Chervin, Ph.D., Author, The Kiss from the Cross

"Why couldn't I put this book down? Its characters are unforgettable; its author makes simple goodness winsome, even heroic; and its social indictment is as important as that of Brave New World."
-Peter Kreeft, Author, Back to Virtue

"This is a novel of hope about failed loves, failed lives, and, yes, failed societies. Yet, it touches the heart of things in the lives of those whom O'Brien calls "children of the last days." This is a gripping 'adventure' of Tolkien inspired human beings against bureaucratic 'Conditioners', as C.S. Lewis called them."
-James V. Schall, S.J., Georgetown University

"More realistic than fantastic, this is a suspenseful tale of a family's heroic struggle to survive in an afflicted world. Plague Journal is an account of the effect of a spiritual and social pestilence in twentieth century Canada. O'Brien understands what plagues do to society, to friendship and to family. A story that is gripping, moving and enlightening."
-J. Christopher Corkery, G.K. Chesterton Institute

John Paul II: I Kept Looking for You