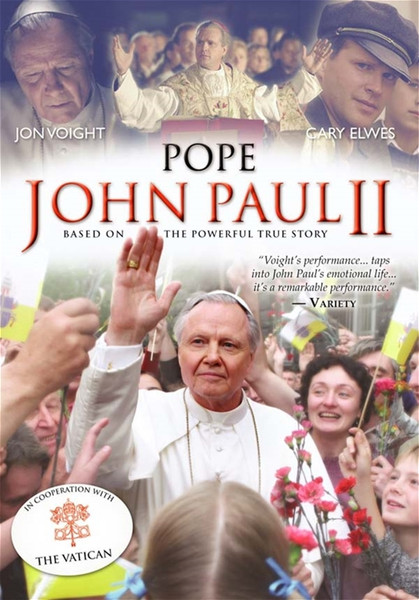 This DVD can be sold only in the US and Canada.

This epic film follows Karol Wojtyla’s journey from his youth in Poland through his late days on the Chair of St. Peter. It explores his life behind the scenes: how he touched millions of people and changed the face of the Church and the world; how he defended the dignity of mankind. Jon Voight’s powerful, Emmy-nominated performance as John Paul II was widely praised, as was Cary Elwes as the young Karol. Shot on location in Rome and Poland in close connection with the Vatican, this is the definitive epic film on the life of Pope John Paul II. Stars Jon Voight, Cary Elwes, Ben Gazzara, James Cromwell, and Christopher Lee. DVD includes many special features such as deleted and behind the scenes, the making of the movie and footage of the World Premiere screening at the Vatican with Pope Benedict XVI.

Available in English with Spanish Subtitles. This movie is Not Rated

“Watching this film has renewed in me a sense of profound gratitude to God for having given the Church and the world a Pope of such an exalted human and spiritual nature.”
—Pope Benedict XVI

"Although shot on a lavish scale in Italy, Poland and elsewhere, 'Pope John Paul II' succeeds on intimate terms even when troops are marching or huge crowds are filling St. Peter's Square, and Elwes and Voight are largely responsible. The movie is honestly and actually about something... It's the ability to instill joy in human hearts, and the film not only celebrates it but, in its finest moments, even possesses it."
—The Washington Post

"Voight stands out... he closely mirrors our image of the pope as a person: that mix of majesty and humility, humor and steel."
—USA Today

"Writer-director John Kent Harrison wisely finds a narrative focus... as the pope stares down the unraveling Soviets hoping to help free his native Poland. More than anything, Voight's performance... taps into John Paul's emotional life... it's a remarkable performance."
—Variety

"Succeeds brilliantly... it does reveal why most of those who criticized [Pope John Paul II] also loved him."
—Pittsburg Post-Gazette

"Elwes... deftly depicts the internal struggle that finally drove Wojtyla to be trained for the priesthood. [This film] understands the importance of taking the time to see Pope John Paul II as a fully rounded human being as opposed to a hollow icon."
—Seattle Post-Intelligencer