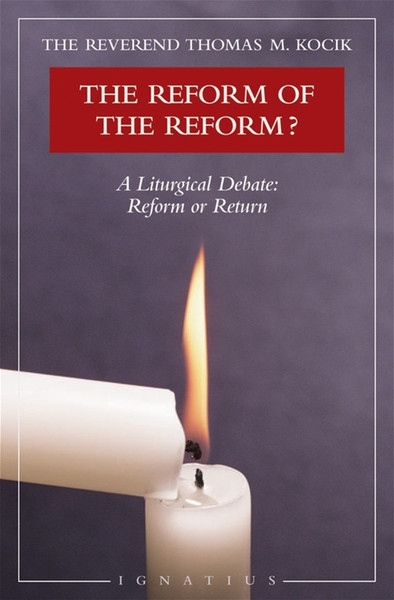 Disturbed by the direction in which the post Vatican II liturgical reforms have moved, two fictitious representatives of mutually antagonistic movements debate the remedy for "correct" liturgical reform.

This unique work presents a debate between a "traditionalist" who argues for a return to the pre-Vatican II liturgy, and a reformist (no liberal himself) who advocates a new liturgical reform more in keeping with what the Council fathers had in mind. They bring to the debate the insights of renowned authorities on the liturgy, including Cardinal Ratzinger, Msgr. Klaus Gamber, Michael Davies, Fr. Brian Harrison and Fr. Aidan Nichols.

This book is written for anyone interested in the Church's liturgy, and the controversies surrounding the liturgical renewal. It is both a primer for those who lack the theological and liturgical expertise to articulate their dissatisfaction with the state of the liturgy, and an excellent resource for those specialists who would appreciate having a single volume for consulting salient points from numerous authorities.

"Fr. Kocik presents an enlightening and fair debate between traditionalists and reformers on how to resolve the current liturgical crisis in the Catholic Church."
—Fr. Kenneth Baker, S.J., Editor, Homiletic & Pastoral Review

My Body Given for You (Digital)

In Memory of Me (Digital)

Ceremonies of the Liturgical Year (Digital)