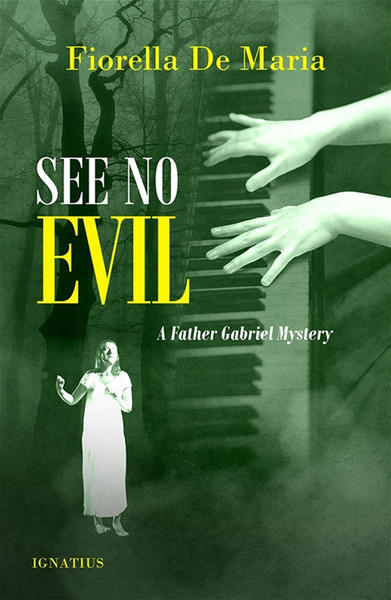 In this third title in the Father Gabriel Mystery series, the detective priest is less than pleased to find himself the reluctant guest at a wealthy local family's Christmas party. Only the excellent – and probably black market – food softens the horror of meeting the odious Victor Gladstone, a veteran reporter, an ardent anti-clerical and the only witness to a wartime massacre no one wishes to hear about.  When Victor is found dead on the Martin estate the next morning, the apparent victim of an unfortunate accident, Gabriel is drawn into the mystery of who among the family's chattering guests could have wanted the old man dead.

Gabriel quickly realizes that Victor Gladstone, like any good reporter, had a nose for rotten behavior, but as Gabriel's investigation moves towards its tragic conclusion, he faces the not one but two serious questions: Who is guilty of Gladstone's murder? and Is anyone truly innocent?

This mystery focuses on the issue of indirect involvement in evil, particularly buying and selling property stolen from victims of the Nazis and witnessing Nazi crimes.

"Once again De Maria presents to us a world worthily reminiscent of the post-war phase of the golden age of mystery fiction but illuminates it with her own special flair."
— Eleanor Nicholson, Author, A Bloody Habit: A Novel

"How can we forgive others for crimes of which they are guilty? How can we forgive ourselves for crimes in which we are complicit? Is it easier to turn a blind eye than to turn the other cheek? These questions, and their answers, are at the heart of De Maria's latest Father Gabriel mystery."
— Joseph Pearce, Editor, the Ignatius Critical Edition series

"Set in bygone England, this involving murder story addresses important moral questions and, in places, moves the reader with its evocation of war-wounded Europe and the impact of mass violence on the consciousness of a generation."
— Sally Read, Author, Annunciation: A Call to Faith in a Broken World

"In See No Evil De Maria takes on the country house murder mystery and imbues it with moral seriousness. Neither the author nor her hero Father Gabriel are willing to ignore the privations and the social inequalities of 1940s England to revel in the glamour of the privileged."
— Dorothy Cummings McLean, Author, Ceremony of Innocence: A Novel