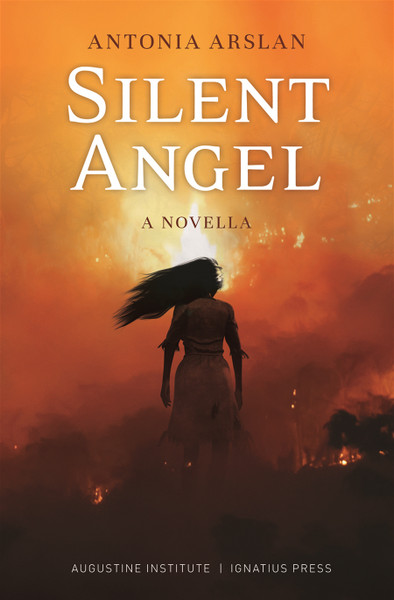 Based on a true story that hints at the presence of miraculous grace, The Silent Angel is a powerful account of human resilience and heroic faith set against the backdrop of the massacre of Christians during the Armenian Genocide.

This tale opens up with a scene of carnage and devastation, from the ruins of a monstary to lifeless bodies—the doings of an army of young Turks. Silent Angel follows the story of five survivors: three women, a child, and a Greek monk. They are forced to wander through the deserted Valley of Moush in search of a new life and a better destiny than their Armenian brothers.

During the most painful moment of their lives, they become guardians of a book of inestimable value, the Book of Moush, an ancient illuminated manuscript. Believing the book to be a talisman of sorts, they vow to bring the book to safety, even to defend it with their own lives. Antonia Arslan tells this story with intense compassion and clarity, taking the reader on a desperate search for truth and salvation.

"There is a reason why it has come into their hands. It means that the angels who watched over it decided to give it not to wise priests, who touched it 'with immaculate hands' as the liturgy proclaims, but expressly to them, this small company of three women, a boy, and a man, fleeing toward the mountains, and united by chance among the ruins of the monastery."
— From The Silent Angel

The miraculous story of the Msho Jarendir (A collection of homilies and a Martyrology) is an eloquent testimony to the faith of two Armenian women, who during the Genocide, offered themselves and their lives for a sacred manuscript: the word of God. It is a story with a happy ending for the manuscript. It was divided into two parts. Through the providential care of the women the parts today embrace each other and have a safe home in the Matenadaran, the great repository of Armenian manuscripts in Yerevan, Armenia.

The emblematic story of the survival of the Msho Jarendir could have no better bard than Antonia Arslan. Her powerful and loving voice carries us through those dark days, reminding us not of what Armenians lost, but of what they found: that even in the valley of death we are never alone.

— His Excellency Anoushavan Tanielian, Prelate of the Armenian Apostolic Church of the Holy See of the Great House of Cilicia.

Angels and Saints at Ephesus