A Dialogue on the Eucharist with C. S. Lewis, Billy Graham and J. R. R. Tolkien 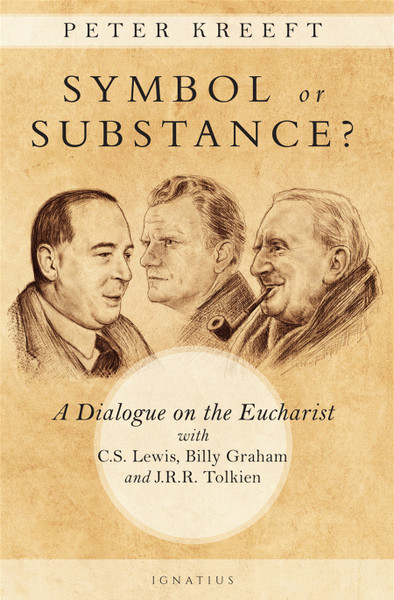 In this engaging fictional conversation, Peter Kreeft gives credible voices to C. S. Lewis, J. R. R. Tolkien, and Billy Graham as they discuss one of the most contentious questions in the history of Christianity: Is Jesus symbolically or substantially present in the Eucharist?

These widely respected modern Christian witnesses represent three important Western theological traditions. Graham, an ordained Southern Baptist minister who traversed the world and the airwaves to spread the good news of salvation, represents evangelical Protestantism. Lewis, an Oxford professor, a prolific Christian apologist, and the author of The Chronicles of Narnia, was a member of the Church of England. Also an Oxford don, Tolkien was a friend of Lewis, the author of The Lord of the Rings, and a Roman Catholic.

While Lewis and Tolkien likely discussed the Eucharist during their long friendship, the conversation in this book never took place—but it could have, says Kreeft, who faithfully presents the views of these three impressive men.

"In our contentious cultural climate, reasonable, friendly dialogue on important issues is becoming a lost art. Through his characters, Peter Kreeft offers a thoughtful and fair-minded exploration of the differing views on the Eucharist among Anglicans, Catholics, and Evangelical Protestants, and in the process, models how to discuss a difficult topic in a gracious and friendly manner."
— Holly Ordway, Author, Not God's Type: An Atheist Academic Lays Down Her Arms

"We've all wished that we could be the proverbial fly on the wall. Peter Kreeft makes it possible in this wonderful book, which allows us to listen to an imaginary conversation between C. S. Lewis, J. R. R. Tolkien, and Billy Graham on the thorny topic of the Eucharist. Their imaginary presence enlightens our minds on the Real Presence."
— Joseph Pearce, Author, Catholic Literary Giants

"For one riveting evening we are invited to eavesdrop on C.S. Lewis, J.R.R. Tolkien, and Billy Graham. Rarely have I learned so much while being so entertained. Perhaps this book's greatest achievements lie in Kreeft's tender analysis of what unites the different churches, his gift of charitable listening, and his singular ability to illuminate."
— Sally Read, Author, Night's Bright Darkness: A Modern Conversion Story

"In Kreeft's dexterous hands, we get the inspiration, the debate, the mystery, and ultimately the truth about the Eucharist. Full of curiosity, insight, and good humor, Symbol or Substance brings twentieth- century heroes to the table to discuss the heart of the matter with loving candor."
— Tyler Blanski, Author, An Immovable Feast: How I Gave Up Spirituality for a Life of Religious Abundance

"When I saw that my favorite contemporary author, Peter Kreeft, was writing a book about a conversation between three of my biggest personal heroes, I had very high expectations. This book exceeded them! Using a conversational format of which he is the master, Professor Kreeft manages to combine history, theology, and philosophy in a way that informs, edifies, and entertains."
— Don Johnson, Film Producer-Director, Convinced: Why Would Anyone Become Catholic?