Body of Christ and Temple of the Holy Spirit 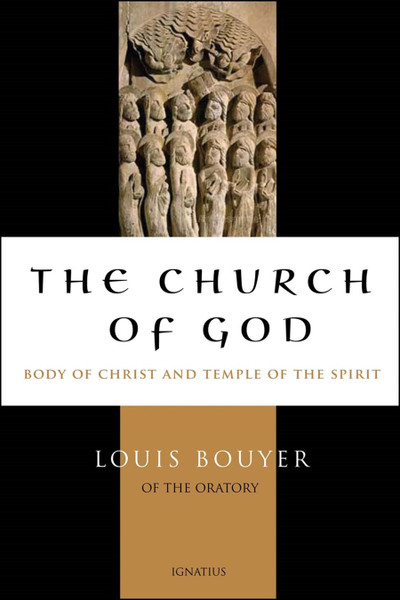 How does the Church perceive herself? Fr. Louis Bouyer's The Church of God sets out to answer that question, in light of Tradition and theological reflection through the centuries, but especially by drawing on the teachings of the Second Vatican Council. This book is a highly-readable, thorough synthesis of ecclesiology after the Council, presented by one of the greatest theologians of the 20th century.

Bouyer, himself a former Lutheran minister, also explores Reformation views of the Church, as well as the Catholic Church's deepened understanding of her distinctive identity and her imperfect but real communion with the Orthodox churches and Protestant ecclesial communities. It offers a foundation for sound ecumenical discussion about the nature of the Church.

The Church of God is a major contribution to the ecclesiology of communion fostered by the Second Vatican Council and continued by Pope Paul VI, but especially by John Paul II and Benedict XVI. Indeed, the book reflects the "hermeneutic of reform" Pope Benedict XVI insists should guide the interpretation of Vatican II.

"Bouyer begins by sketching the patristic doctrine of the Church and the seeming loss of this doctrine in the medieval, Reformation, and Baroque periods due to increasingly juridical conceptions. The heart of the book, in which it receives its distinctive Bouyerian stamp, is his lengthy biblical and liturgical exploration of the Church, culminating in his reflections on Mary's motherhood. This book sheds important light on Lumen Gentium and has an enduring place alongside the works of Bouyer's ecumenical peers and mentors Cullmann, Bulgakov, de Lubac, and Congar."
- Matthew Levering, Ph.D., Professor of Theology, University of Dayton