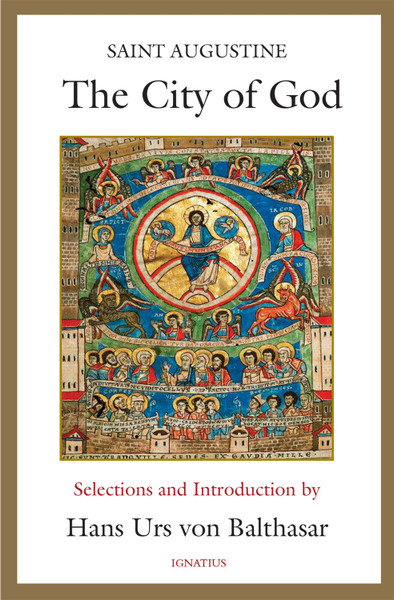 Few books have impacted the West as deeply as The City of God. Saint Augustine blazed trails not only in the realms of politics and philosophy, but in the life of the heart, exploring the relationship between a loving God and a shattered world. Thomas Aquinas, Charlemagne, John Calvin, Hannah Arendt, and Pope Benedict XVI alike have drawn from this text's deep and varied wells.

Yet few of us will ever read the epic work, which often stretches past one thousand pages. This volume, however, offers a shorter, simpler road through Augustine's masterpiece. Edited by Hans Urs von Balthasar, it presents key selections from The City of God, culled for their beauty and spiritual power, buttressed with notes, and arranged by theme—from the creation of the world to the Roman Empire, from human happiness to the nature of death.

This edition is meant above all for prayer and meditation. Still, if readers wish to engage Augustine on a critical level, the introduction by von Balthasar—recipient of the 1984 International Paul VI Prize under Pope John Paul II—provides a rigorous analysis of the City, with an eye on the philosophical and theological discourse of the twentieth century. The book is also furnished with a detailed index of names, subjects, and scriptural references.

All excerpts of the City are taken from William Babcock's 2013 translation with New City Press, praised by critics as "a remarkable achievement" (Johannes van Oort), "the most beautiful and up-to-date of the existing versions" (Arabella Milbank).

"With his selections from and superb introduction to Augustine's monumental City of God, Balthasar succeeds in making the text available to a new group of readers, assisting them as they face the problems of our own time."
— David L. Schindler, Professor of Fundamental Theology, John Paul II Institute for Studies on Marriage

"This eminently readable and masterful translation of selections from The City of God, complemented by an expert introduction by Hans Urs von Balthasar, is highly recommended for both scholars and first-time students. All will appreciate how Balthasar's profound understanding of Saint Augustine's classic text uniquely enhances its capacity to speak to our own age."
— Margaret M. Turek, S.T.D., Author, Atonement: Soundings in Biblical, Trinitarian, and Spiritual Theology

"This volume takes readers through the Bishop of Hippo's most extensive and arduous work, certainly a treatise for our times in that we too are trying to make real the right relationship between the political and the theological, between empire and ecclesia, and the ways of the world and the ways of our Lord."
— Fr. David Meconi, S.J., Professor of Theology, St. Louis University; Editor, Homiletic & Pastoral Review

"A must-have for anyone interested in Augustine's theological worldview. Finely translated into English by Rachel Coleman, Balthasar's introduction draws out both timely and timeless themes about politics and the two cities, philosophy and Christianity, and history and historicity. This is an exciting new resource for those who want to meditate on City of God in a contemplative spirit."
— Veronica Roberts Ogle, Author, Politics and the Earthly City in Augustine's City of God

"Augustine's City of God is essential for understanding the continuity and coherence of western civilization, yet its massive length is intimidating to many. So there's a kind of pedagogical delight in rediscovering these selections by one of the foremost theologians of the twentieth century. It can only delight students and teachers alike to find this judicious abridgment of Augustine's masterpiece, now available for the first time in the very best translation on offer today."
— C.C. Pecknold, Professor of Systematic Theology, Catholic University of America

Sex and the Unreal City

The Will of God (Digital)

The Will of God