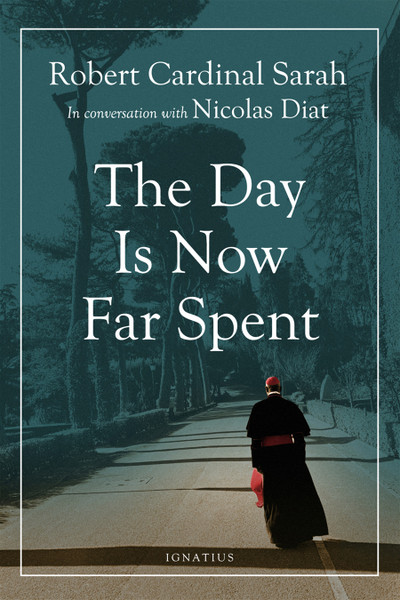 Robert Cardinal Sarah calls The Day Is Now Far Spent his most important book. He analyzes the spiritual, moral, and political collapse of the Western world and concludes that "the decadence of our time has all the faces of mortal peril."

A cultural identity crisis, he writes, is at the root of the problems facing Western societies. "The West no longer knows who it is, because it no longer knows and does not want to know who made it, who established it, as it was and as it is. Many countries today ignore their own history. This self-suffocation naturally leads to a decadence that opens the path to new, barbaric civilizations."

While making clear the gravity of the present situation, the cardinal demonstrates that it is possible to avoid the hell of a world without God, a world without hope. He calls for a renewal of devotion to Christ through prayer and the practice of virtue.

"To call this book a tour de force would be an understatement. It’s an astonishing work: clear, simple, visionary—and filled with hope."
— Most Rev. Charles Chaput, O.F.M. Cap., Archbishop of Philadelphia

"Cardinal Sarah is a latter-day Christian prophet, and this book is his most urgent wake-up call yet to a West sleepwalking toward a paganized dystopia."
— Sohrab Ahmari, Author, From Fire, by Water: My Journey to the Catholic Faith

"May Cardinal Sarah's pastoral charity, expressed in an extraordinary manner in this book, lead many souls to 'cast off the works of darkness and put on the armor of light', to 'put on the Lord Jesus Christ'."
— Raymond Cardinal Burke, Author, Hope for the World: To Unite All Things in Chris

"Especially convincing are the cardinal's reflections on the Church's triumph, which can be achieved only if we follow Christ intellectually, spiritually, and morally, without excusing ourselves from a total self-gift to God."
— Gerhard Cardinal Müller, Author, The Power of Truth: The Challenges to Catholic Doctrine and Morals Today

"Realistic and hope filled, this is essential reading for believers living in a post-Christian world."
— Most Rev. Samuel Aquila, Archbishop of Denver, Colorado

"A riveting account of the issues of our times. Acutely aware of the role of the devil, the cardinal pulls no punches in offering the most cogent analysis of what ails us today."
— Bill Donohue, Author, Common Sense Catholicism: How to Resolve Our Cultural Crisis

"Cardinal Sarah's comprehensive view of the Church and society is as chilling as it is accurate. He offers great consolation to all by reminding us that 'God opens his hand' and gives us the greatest possible remedy: prayer."
— Most Rev. Thomas Olmsted, Bishop of Phoenix, Arizona

"The message of Cardinal Sarah is as timely as the solutions he proposes are timeless. His voice of wisdom and holiness urgently needs to be heard."
— Most Rev. Salvatore Cordileone, Archbishop of San Francisco, California

"No other work, or churchman, addresses with such clarity the profound moral and spiritual crisis engulfing the world today, and the solutions for it. A monumental book that every Catholic, and Christian, needs to read!"
— Raymond Arroyo, New York Times Best-Selling Author, EWTN Host, The World Over

"I particularly urge my brother priests and bishops to read this book, taking to heart its appeal to us for spiritual and ecclesial reform and renewal, which must begin with us."
— Most Rev. Alexander Sample, Archbishop of Portland, Oregon