The Decline and Fall of Sacred Scripture

How the Bible Became a Secular Book 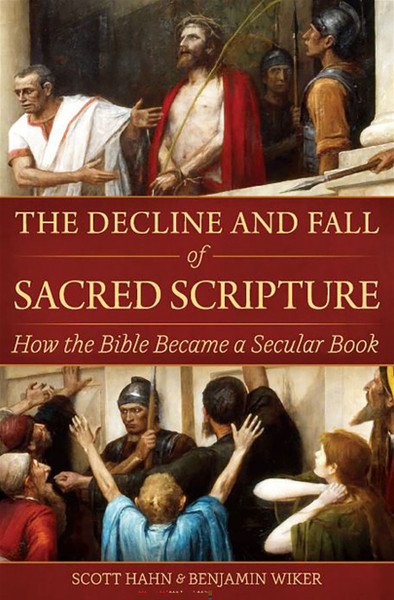 The Decline and Fall of Sacred Scripture

What is wrong with Scripture scholarship today? Why is it that the last place one should go to study the Bible is a biblical studies program at virtually any university? Why are so many faithful priests and pastors, and the people in their pews, unaware of the centuries-long effort to turn the sacred Word of God into just another secular text?

In The Decline and Fall of Sacred Scripture: How the Bible Became a Secular Book, authors Scott Hahn and Benjamin Wiker trace the various malformations of Scripture scholarship that have led to a devastating loss of trust in the inspired Word of God.

From the Reformation to the Enlightenment and beyond, Hahn and Wiker sketch the revolutions and radical figures that led to the emergence of the historical-critical method
and the pervasive ill effects that are still being felt today.

"We are living in a world where nearly every aspect of life has been politicized, resulting in a less-than-truthful understanding of what it means to be human. But what if the Bible has also been politicized over the centuries? …The good news is that Hahn and Wiker instill in the reader a renewed hope and confidence in the book of all books."
--Jeff Cavins, Founder and Creator, The Great Adventure Bible Study

"What riveted me to The Decline and Fall of Sacred Scripture was more than just an apologetic defense of Scripture. That's been done before. Hahn and Wiker masterfully demonstrate in remarkable detail the devastation that follows in the wake of the abandonment of the inspired text."
--Tim Staples, Senior Apologist, Catholic Answers

"Scott Hahn and Benjamin Wiker have written a very readable explanation of what has gone wrong with modern biblical scholarship. How did it get to be such an incoherent mess? Surprisingly, as they answer this question, they end up explaining a great deal of what has gone wrong with the entire modern world."
--Cy Kellett, Host, Catholic Answers Live

"Hahn and Wiker teach the reader to be skeptical of the skeptics. This book does the important work of clearing the ground of the scholarly rubble that has sown the seeds of doubt so that the Bible can once again be turned to as the source of authentic theology and as God's great love letter to all of us, His children."
--Jeff Morrow, Coauthor, Modern Biblical Criticism as a Tool of Statecraft (1700–1900)