To the Synod of Chalcedon in 451 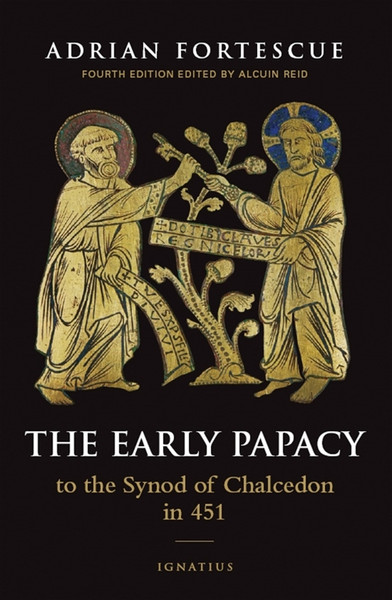 Adrian Fortescue, a British apologist for the Catholic faith in the early part of the 20th century, wrote this classic of clear exposition on the faith of the early Church in the papacy based upon the writings of the Church fathers until 451. No ultramontanist, Fortescue can be a keen critic of personal failings of various Popes, but he shows through his brilliant assessment of the writings of the Church fathers that the early Church had a clear understanding of the primacy of Peter and a belief in the divinely given authority of the Pope in matters of faith and morals.

Referring to the famous passage in Matthew 16:18 where Jesus confers his authority upon Peter as the head of the Apostles, and the first Pope, Fortescue says that, while Christians can continue to argue about the exact meaning of that passage from Scripture, and the various standards that are used for judgments about correct Christian teaching and belief, ""the only possible real standard is a living authority, an authority alive in the world at this moment, that can answer your difficulties, reject a false theory as it arises and say who is right in disputed interpretations of ancient documents.""

Fortescue shows that the papacy actually seems to be one of the clearest and easiest dogmas to prove from the early Church. And it is his hope through this work that it will contribute to a ressourcement with regard to the office of the papacy among those in communion with the Bishop of Rome, and that it will assist those outside this communion to seek it out, confident that it is willed by Christ for all who would be joined to him in this life and in the next.