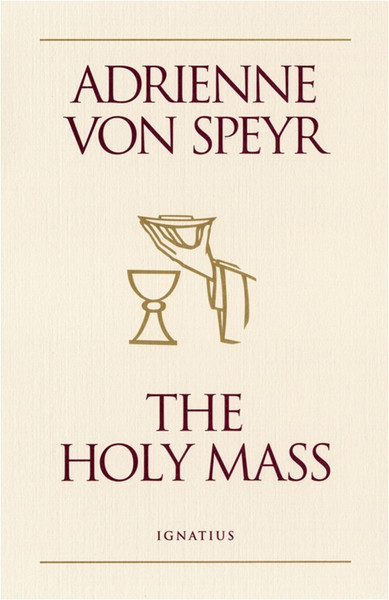 This meditation on the Mass by the mystic Von Speyr contains many penetrating insights, particularly about the nature of the Mass as sacrifice-of Christ, of his priest, and of every believer united in and with the entire Church-expressed with a poetic layering of concepts and images that is at once complex and lucid, dense and transparent. The meditation rewards the present-day reader's effort with a fresh and palpable sense that the real truth of the Church's constant re-presentation, re-enactment of Christ's "sacrifice once offered" transcends not only the nearly half-a-century since Von Speyer's meditation, but all time -time which is itself sanctified precisely through the endless repetition of the Sacrament of unity that is the Holy Mass.

Adrienne von Speyr was a contemporary Swiss convert, mystic, wife, medical doctor and author of some 70 books on spirituality and theology. She entered the Church under the direction of one the greatest theologians and spiritual writers of the 20th century, Fr. Hans Urs von Balthasar, who became her spiritual director and confessor for the last 30 years of her life. Her writings, recognized as a major contribution to the great mystical writings of the Church, are being translated and published by Ignatius Press. Among her most important works are Book of All Saints, Confession, The World of Prayer, Handmaid of the Lord, and The Passion from Within.

Heart of the Christian Life (Digital)