The Man Who Founded California

The Life of Saint Junipero Serra 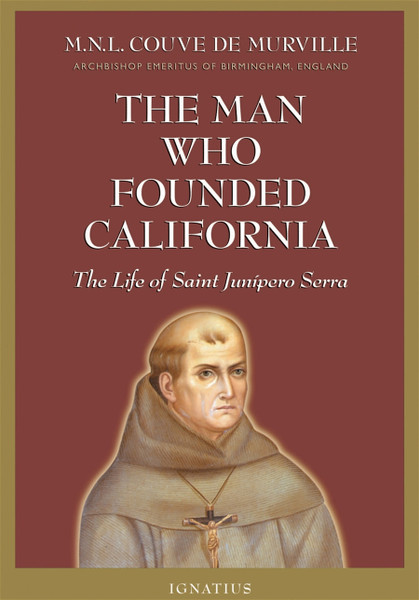 The Man Who Founded California

This work is a popular but thorough biography of St. Junipero Serra (1713- 1784), the tireless Franciscan missionary who came to California in the eighteenth century to evangelize the Native Americans. Well known for the historic missions that he helped establish all along the coast from San Diego to San Francisco (21 in all), Father Serra is even recognized by the secular society of the United States government as the “Founder of California”. As one of the pioneers who created the United States of America, his larger than life-size statue stands in the hall of the U.S. Capitol.

Archbishop Couve de Murville presents an historical and spiritual biography of Serra from his childhood and student days in Majorca, Spain, to his time in Mexico, and to his great missionary work in California. Regarded as a great teacher by his order, his superiors initially made Serra a professor of theology at the Lullian University in Palma, Spain. After teaching for five years, he answered the call to be a missionary to the New World, and embarked on a ship to Mexico in 1749. For the rest of his life he worked tirelessly as a preacher and a missionary in Mexico and California, his motto being “Always forward, never back.”

Canonized a saint by Pope Francis in 2015, Father Serra’s presence and work are still very much alive though the beautiful missions that are visited by millions of people every year.

This deluxe edition includes numerous illustrations, most in color, of the life and work of Serra, especially of the missions that dot the landscape of California, many gloriously restored to their original beauty.

“At crucial moments in human affairs, God raises up men and women whom he thrusts into the roles of decisive importance for the future development of both society and the Church. We rejoice all the more when their achievement is coupled with a holiness of life that can truly be called heroic. So it is with Junipero Serra, who in the providence of God was destined to be the Apostle of California.”
— St. John Paul II

“Junipero Serra is a great example for Catholics. He dedicated his life to the mission of evangelization, to bringing the good news of the Gospel to America. He understood that the purpose of the Church is to help us all grow as human persons and to respond to God’s call: to love God and love others.”
— Most Reverend Jose Gomez, Archbishop of Los Angeles, California

The Man Who Was Thursday

Who Designed the Designer?

The Man Who Left His Mark

The Man Who Left His Mark (Digital)

Who Designed the Designer? (Digital)

Who Is a Christian? (Digital)

Who Is a Christian?

Who Designed the Designer?