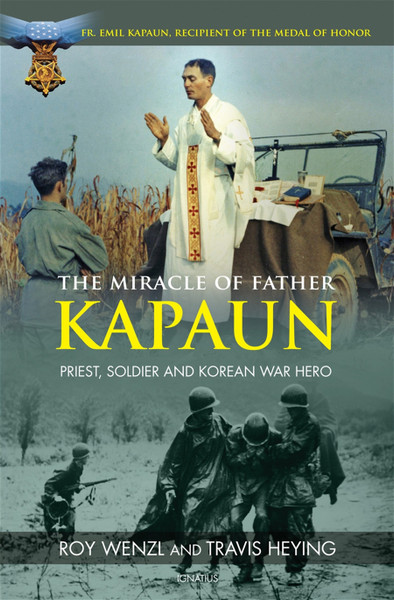 Emil Kapaun-priest, soldier and Korean War hero- is a rare man. He has been awarded the Medal of Honor, the nation's highest military award, and is also being considered by the Vatican for canonization as a saint.

As remarkable as this double honor are the non-Catholic witnesses who attest to Father Kapaun's heroism: the Protestants, Jews and Muslims who either served with the military chaplain in the thick of battle or endured with him the unbelievably brutal conditions of a prisoner of war camp. As journalists Roy Wenzl and Travis Heying discovered, all of these Korean War veterans, no matter their religion, agree that Father Kapaun did more to save lives and maintain morale than any other man they know.

Then there are the alleged miracles-the recent healings attributed to Father Kapaun's intercession that defy scientific explanation. Under investigation by the Vatican as a necessary step in the process of canonization, these cures witnessed by non-Catholic doctors are also covered in this book.

In tracking down the story of Father Kapaun for the Wichita Eagle, Wenzl and Heying uncovered a paradox. Kapaun's ordinary background as the son of Czech immigrant farmers in Kansas sowed the seeds of his greatness. His faith, generosity and grit began with his family's humility, thrift and hard work. Lavishly Illustrated with 32 pages of Photos.

"Whether you know nothing about Father Emil Kapaun or have read other books or articles about him, you will be grateful that you took the time to read this one. I am glad that I did."
- Most Rev. Michael O. Jackels, Bishop of Wichita

"This is the story about a "Man's Man!" He was a hero. He was holy. He was real. What a great book - I could not put it down and read it in one sitting! Fr. Kapaun's story will inspire you too to live your life for God and others and be the saint that God is calling you to be!"
- Fr. Larry Richards, Author, Be A Man!

"We need heroes to teach us how to live and decide in the concrete situations of our daily lives. Father Emil Kapaun is a figure whose heroism during the Korean War still serves as a lamp to guide our feet on the path of life.The Miracle of Father Kapaun will introduce you to this inspiring figure of a man for others. His care of the soldiers imprisoned with him inspired hope in them. I invite you to discover a priest, Army Chaplain, and hero on the pages of this book."
- Archbishop Timothy P. Broglio, Archbishop for the Military Services, USA

"The Father Kapuan story has long been in need of more widespread knowledge. It is a priestly life of service and dignity. The record of military chaplains is a special category in the service of God and the men who fight, even a service to their enemies, as is the witness of Father Kapaun's death in a prison camp reminds us."
- James V. Schall, S.J., Georgetown University

"Father Emil Kapaun was a modern American priest-hero whose unique and inspiring story should be known to every Catholic."
- James Hitchcock, Author, History of the Catholic Church