The Untold Story of C.S. Lewis 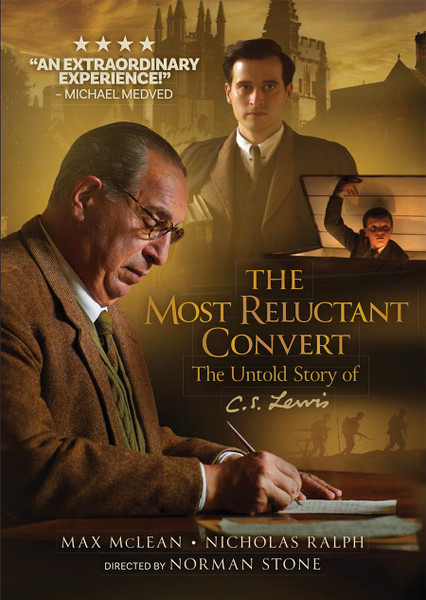 The Most Reluctant Convert brings to life the spiritual evolution of one of the 20th century’s sharpest minds and keenest wit – C.S. Lewis. Beautifully filmed in and around Oxford, England, this engaging biopic follows the noted author of The Chronicles of Narnia from the tragic death of his mother, his strained relationship with his father and the nightmare trenches of World War One to Oxford University, where friends like J.R.R. Tolkien and Hugo Dyson challenge his unbelief.

Written for the screen and directed by two-time Emmy and BAFTA winner Norman Stone (BBC’s Shadowlands), The Most Reluctant Convert features award-winning actor Max McLean as the older Lewis, Nicholas Ralph--breakout star of Masterpiece’s All Creatures Great and Small--as young Lewis and introduces Eddie Ray Martin as the childhood Lewis.

Bonus Features:
- The Making of The Most Reluctant Convert
- Behind the Scenes
- Interview with Actors
- Conversations with the Director

"A thoughtful, inviting movie. When the man on screen is a very well-portrayed C.S. Lewis—an individual of brilliant mind and fluent elocution—it becomes a nuanced experience worth having. And sharing."
-FOCUS ON THE FAMILY

"An absorbing glimpse into the faith journey of one of the 20th century’s most influential authors. Thanks to this film’s concise script, the influences and turning points in his [C.S. Lewis’] life emerge in 74 entertaining minutes."
-WORLD Magazine

"A thoughtful retrospective. In this Lewis, perhaps, the friend you thought you knew will become more real than ever—simultaneously intent on the person of Christ yet stumbling toward eternity, just like you."
-CHRISTIANITY TODAY Magazine

"Max McLean’s masterly performance brings me vividly back to 1962 when I attended C.S. Lewis’ final official lectures in Cambridge. Max has captured the essence of Lewis’ personality so wonderfully."
- DR. JOHN LENNOX, Emeritus Professor at Oxford and student of C.S. Lewis

"Max McLean brought Jack Lewis vividly to life, so much so that my wife and I, who have been so formed by him, were moved to tears. Anyone who is a fan of C.S. Lewis (as well as those who have yet to encounter his razor-sharp mind) will enjoy this movie."
-Tim Keller, NY Times best-selling author, The Reason for God and The Meaning of Marriage