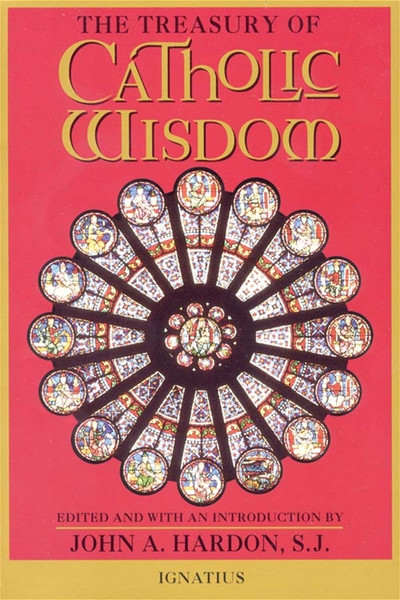 The Treasury of Catholic Wisdom is a Catholic library in miniature, a one-volume microcosm of what the Church's great minds have thought and said since the apostolic age.

Indeed, in The Treasury of Catholic Wisdom, noted theologian Fr. John A. Hardon has compiled the works of thirty-three of the greatest Catholic thinkers and writers, representing every period of the Church's passage through time, from the beginnings of Christianity to the present day. Here are men and women, bishops and priests, religious and the laity "whose native talents were elevated by the supernatural light that God reserves for those who are most submissive to His will."

Included in this extraordinary and fascinating anthology are the works of the early saints, such as Gregory, Basil, Augustine, John Chrysostom, Patrick, Bernard Francis, and Thomas Aquinas. Here, too, are the writings of the great reformers Ignatius, Catherine of Siena, and Teresa of Avila; the mystic John of the Cross; the practical wisdom of Francis de Sales, Louis de Montfort, and Peter Julian Eymard; and the modern-day reflections of Gerard Manley Hopkins, Francis Thompson, Therese of Lisieux, G.K. Chesterton, and Fulton J. Sheen.

The Treasury of Catholic Wisdom is a comprehensive anthology of the outstanding Catholic literature from the first century to modern times. Mystics and martyrs, philosophers and theologians, poets and prose writers are quoted at length and in depth. They are truly representative of the spirit and substance of Catholicism in its paradox of phenomenal stability and versatility over the centuries.

Fr. Hardon has selected those writings which are representative of the thought and philosophy of each contributor, and has carefully chosen excerpts which are not always the most familiar. Thus, his volume provides not only a fresh collection of the best of Catholic wisdom, but also a uniquely comprehensive work which offers enlightenment and faith for generations of readers.

John A. Hardon, S.J., holds a master's degree in philosophy from Loyola University and a doctorate in theology from the Gregorian University in Rome. He is the author of The Catholic Catechism and many other books. Fr. Hardon is also a founder of the Catholic Home Study Institute, a correspondence school which operates under pontifical approval.

A Child's Treasury of Bible Stories

For Love of Wisdom (Digital)

The Moral Wisdom of the Catholic Church

For Love of Wisdom