Vespers for the Immaculate Conception 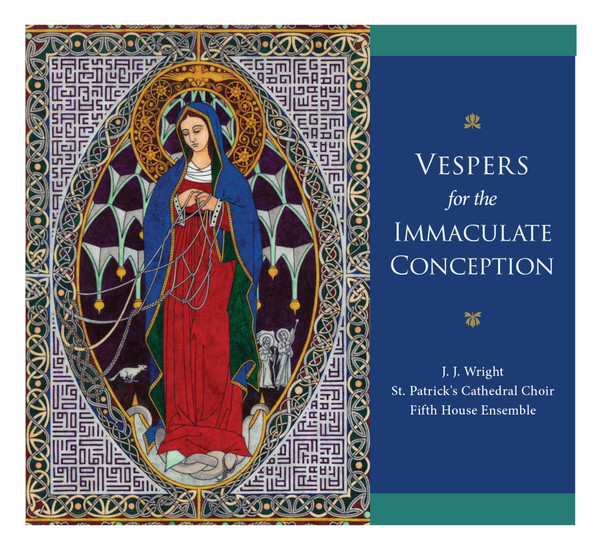 Vespers for the Immaculate Conception

Produced by the Grammy Award–winning and Billboard Chart–topping composer, musician, and choir director at the University of Notre Dame, J.J. Wright, this album is a unique, beautiful recording that brings audiences a new vision of religious music, that is, music set aside for contemplation of the divine but not intended for use in liturgical worship. By combining the rich heritage of Catholic sacred music with the tradition of jazz, Wright has composed a concertized Vespers service that tells the story of the miraculous origin of Mary. The music takes the listener on a spiritual journey through ancient prayers and psalms that strengthen our relationship with Mary, Mother of God.

Combining a renowned choir, soloists, a string quartet, and a jazz piano trio, this composition is anchored by Gregorian chant and two Baroque motets by Giacomo Carissimi and Marc-Antoine Charpentier, while weaving together scripted and uplifting music for a jazz trio. Hymns include the Salve Regina, Hail Mary, Our Father, Magnificat, and more.

This new recording follows the critical success of Wright's Advent and Christmas cantata, O Emmanuel, which quickly became a classical bestseller and spent weeks on top on the Billboard Classical Charts.

"Wright cites Claudio Monteverdi's thrilling Vespers of 1610 as his primary inspiration in this work. Monteverdi was peerless in both his church pieces and his popular numbers. He let these notions cross-pollinate at times."
— Jack Walton, South Bend Tribune

"With Vespers for the Immaculate Conception, J.J. Wright displays a level of musical maturity and compositional command that is equal parts poignant, edifying, and contemplative. The young Wright establishes himself as a composer of remarkable vision and talent, who composes—to borrow from the theologian Hans Urs von Balthasar—on his knees."