A Memoir of Heroic Faith by the Chancellor's Son 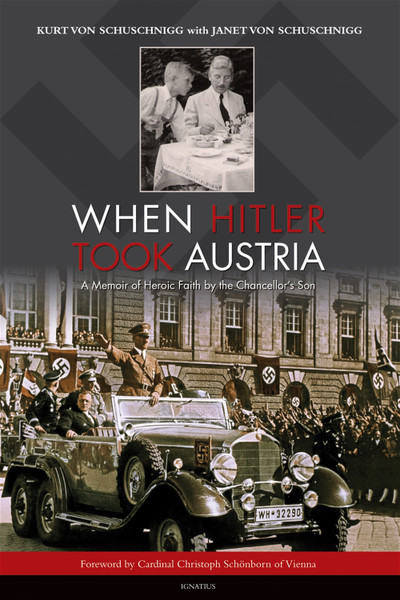 In March 12, 1938, German troops marched into Austria as Adolf Hitler prepared to annex the country. Austrian Chancellor Kurt von Schuschnigg, who had opposed the Nazi take-over of his homeland, was placed under house arrest and subsequently sent with his wife to Sachsenhausen concentration camp.

This is the gripping story of von Schuschnigg and his family as told by his son, who came of age during these dramatic events. His memoir is a tribute to the faith, hope and perseverance of his family and the many people who took great risks in order to help them survive Nazi rule and the Second World War.

The story begins with the junior von Schuschnigg's boyhood and his father's efforts to maintain Austrian independence during the rise of Nazism in Germany, Fascism in Italy, and political unrest in Austria. After the Anschluss, von Schuschnigg's son was allowed to finish his education in Germany, where in order to avoid being drafted into the German army, he went to the naval academy. He ended up on a warship of the Third Reich, serving the regime that held his family captive.

Von Schuschnigg recounts his many harrowing escapes, first as a young naval officer and later as a deserter on the run. At every turn, he is helped not only by his own wits but also by the mysterious working of Providence, which sometimes manifests itself in surprising acts of goodness by others. Includes 24 pages of photos.

Kurt von Schuschnigg, the Austrian chancellor from 1934 to 1938, along with members of his family, "had to pay a high price for his resistance to the evil of tyranny. . . . I am profoundly grateful to Janet von Schuschnigg for this contribution to an American understanding of Austria's history during this period."
From the Foreword by Christoph Cardinal Schönborn, Archbishop of Vienna, Austria

p>"This is a graphic and dramatic first-person account of a crucial period in modern history. It is both riveting and inspiring."
- James Hitchcock, Professor of History, Saint Louis University

When Hitler Took Austria is a crackling good story. I love stories that recreate the world of 1938 and 1939, when all of Europe began to learn how cruel and murderous the Gestapo could be. And I especially love stories of chases over the snowy mountains as dissidents heave strained frosty breaths trying to stay just ahead of the Gestapo they know is getting closer. And it is even better when it is a story of a hero for faith and human honor such as the son of the Austrian chancellor. If you want to understand how our present world came to be, don't miss this book."
- Michael Novak, Scholar in Religion, Philosophy and Public Policy, American Enterprise Institute

When Is Marriage Null? (Digital)