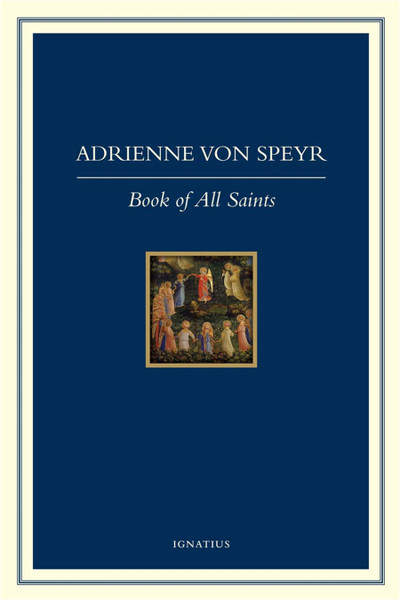 Adrienne von Speyr, a renowned mystic and spiritual writer from Switzerland, was received into the Catholic Church at the age of 38 on the Feast of All Saints, 1940, by one of the theological giants of the 20th century, Fr. Hans Urs von Balthasar. He became her spiritual director and confessor until her death in 1967 during which time Adrienne was favored with many gifts of authentic mystical prayer. Balthasar considered one of the central characteristics of Adrienne's prayer to be her transparency to the inspirations she received from God, along with a deep personal communion with the saints.

Over a period of many years, Adrienne would see the saints (and other devout people) at prayer, and she would dictate what she saw to Fr.von Balthasar - while she was in a state of mystical prayer. Through a unique charism, she was able to put herself in the place of various individuals to see and describe their prayer, their whole attitude before God. Not all of her subjects are saints in the strict sense of the word, but all struggled, with varying degrees of success, to place their lives at the disposal of their Creator. This book presents these unique mystical insights into the prayer lives of many saints taken from Adrienne's direct visions of them in prayer. Among the long list of saints in this book are St. John the Apostle, St. Augustine, St. Francis, St. Thomas Aquinas, St. Ignatius of Loyola, St. Teresa of Avila, St. John of the Cross, St. John Bosco, St. Bernadette, St. Dominic, St. Edith Stein and many, many more.

In this powerful spiritual work, the reader is able to participate in the devotional and spiritual life of the Church throughout the centuries by learning how numerous saints and devout people prayed, thus reflecting on the timelessness and beauty of the prayer of the Church.

"The Book of All Saints is a wonderful gift to the Church because it shows us how the saints pray and because it invites us – by contagion, as it were –to pray ourselves."
— Hans Urs von Balthasar

"The abundant harvest of graces hidden in this theological mission for our times still waits to be more fully carried into the storehouses of the Church for whom she was sent. Now, however, a century after her birth, there is many signs to indicate that the moment of her "reawakening" is at hand!"
— Jacques Servais, S.J., Director, Casa Balthasar, Rome