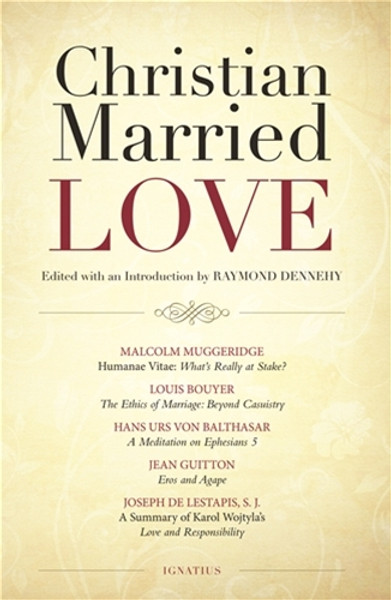 This book presents five insightful essays by well-known theologians and writers who give powerful witness to the truths about love, sex, and marriage illuminated by Humanae Vitae, the prophetic encyclical by Pope Paul VI.

The pieces by Hans Urs von Balthasar, Louis Bouyer, and Malcom Muggeridge were delivered at a symposium on Humanae Vitae held in 1978 at the University of San Francisco. In this year of the fiftieth anniversary of Humanae Vitae, Ignatius Press is pleased to re-release this entire collection, masterfully introduced by Raymond Dennehy.

At the time of the symposium, Muggeridge was not yet a Catholic and perhaps more famous outside the Church than within it for his colorful career as a leftist British journalist, an Allied spy during World War II, and an unorthodox Christian convert with a remarkable relationship with Mother Teresa. In his essay "Humanae Vitae: What's Really at Stake?" he discusses the impact of contraception on the traditional family.

In "The Ethics of Marriage", French priest and theologian Bouyer, formerly a Lutheran, contrasts the "would-be theologians who launched incredible propaganda against Pope Paul and his teaching" with non-Catholics and even non-Christians who praised the pope for upholding the sacredness of sexuality and human life.

Von Balthasar, a Swiss priest and theologian later named a Cardinal by Pope John Paul II, offers a profound meditation on Ephesians 5:21–23. The book concludes with an introduction to Love and Responsibility by Karol Wojtyla (John Paul II).

"This important book deserves to be read carefully and prayerfully by all those seeking the light and truth of Christ concerning the meaning of sex and love in our decadent times. A work that is refreshing in its unabashed support of Magisterial teaching."
— James Likoudis, Lay Witness

"A book well worth reading. It makes an important contribution to the defense of Humanae Vitae and thus of a healthy moral attitude in regard to marriage."
— R.V. Young, Faith & Reason

"Recommended to all who wish a deeper and more fair understanding of the official Catholic position on love, sex, and marriage."
— Fr. James Higgins, C.SS.R., Liguorian

The Christian and Anxiety (Digital)