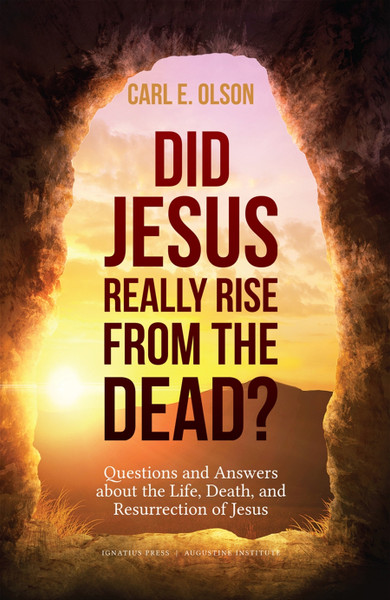 Major feature films such The Passion of the Christ and Risen, and books such as Bill O'Reilly's Killing Jesus raise many questions about one of the greatest controversies in history--what really happened to the crucified body of Jesus of Nazareth.

Using a popular question-and-answer format, this book examines the historical evidence concerning the fate of Jesus. Did Jesus really die on the cross? If so, what became of his body? Was it stolen? Misplaced? Is the resurrection a cleverly devised plot to found a new religion? Did the disciples of Jesus hallucinate? Is the Resurrection of Jesus a myth developed decades later, after the original disciples' experience of Jesus was distorted by a subsequent generation? Or did Jesus rise from the dead, as he promised and as his disciples came to believe and sacrifice their lives to proclaim?

Carl Olson carefully weighs the evidence with in-depth analysis. Whether you are a believer, a skeptic, or something in between, be prepared to have your thinking challenged by this provocative and insightful book.

"Every year, right around Easter, the super-skeptics come out in droves to call into question the truth of the Resurrection. In Did Jesus Really Rise from the Dead?, Carl Olson does an excellent job of laying out the key questions raised by skeptics and offering compelling and well-researched answers. A must-read for any Catholic whose ever wondered about the historical evidence for the Resurrection of Jesus."
- Dr. Brant Pitre, Author of The Case for Jesus: The Biblical and Historical Evidence for Christ

p>"Carl Olson offers a cogent survey of the most common objections to the historicity of the Resurrection, doing the particularly invaluable work of tracing their historical roots and philosophical assumptions in an accessible way. This book is an essential resource, especially for teachers, catechists, and anyone involved in evangelization."
- Amy Welborn, author of the Prove It! series of apologetics for Catholic teens p>"This is a doubly scandalous book. It's about the greatest scandal in history, the Resurrection of Jesus Christ, and it's a scandal in its own right because it dares to argue (convincingly, I think) that the Resurrection actually occurred and that all the arguments against its historicity have fallen flat, including recent arguments from the New Atheists and others. Did Jesus Really Rise from the Dead? will give delight to believers and distress to unbelievers. What more can one ask?"
- Karl Keating, Founder, Catholic Answers

"'If Christ has not been raised, your faith is worthless ... we are of all men most to be pitied.' So says St. Paul. In his new book Did Jesus Really Rise from the Dead? Carl Olson demonstrates there is no pity necessary-the resurrection is true! He analyzes and presents the historical and objective reality of the bodily resurrection of Jesus Christ, the central and crucial fact of all human existence. Written for novice and scholar alike, this book will convince even the skeptic."
- Steve K. Ray, Best-selling author and Host of "The Footprints of God"

p>"Conversant with both the relevant scholarship as well as the misconceptions and false presentations of Jesus current in contemporary culture, Olson's book is an inviting, readable introduction to the question of the resurrection that deepens one's faith in the fundamental fact of Christian faith-that Jesus Christ was truly raised from the dead."
- Dr. Leroy Huizenga, Associate Professor of Theology, University of Mary (Bismarck, N.D.) p>"Scholars are often busy 'rethinking' the Resurrection of Christ only to find, so they tell us, that it never happened, or perhaps that Christ never happened. Carl Olson has read over these various theses and examined their credibility. Not surprisingly, he finds them wanting on this or that particular issue of fact or logic. The Resurrection is at the center of Christianity. Olson's book shows quite clearly why it is and that it is. The scholarship that opposes the Resurrection is seen to be deficient not only in faith but also in reason, in scholarship itself."
- Fr. James V. Schall, S.J., Professor Emeritus, Georgetown University

"For the earliest Christians, to preach Christianity meant primarily to preach the Resurrection. It was the focus of every sermon reported in the book of Acts. It was the heart of the good news which the Christians brought to the world. Yet in some circles today, it has become fashionable not just to doubt the Resurrection, but to question such basic facts as Jesus' very existence. That's why this new book by Carl Olson is so desperately needed. As St. Paul did in the first century, Olson affirms the life-changing power of the Resurrection. But he does more: he shows how the best evidence and contemporary scholarship affirm what Christians have believed for centuries, that Jesus really did rise from the dead. Comprehensive, well-researched, and accessible, this is the best defense of the Resurrection from a Catholic perspective."- Brandon Vogt, Content Director at Word on Fire Catholic Ministries and founder of StrangeNotion

p>Did Jesus Really Rise from the Dead? is a brilliant and lucid presentation of the overwhelming evidence for Christ's resurrection. Like a skilled surgeon, Carl E. Olson masterfully analyzes and dissects the radical skepticism and iniquitous criticism that often dominate the study of the Gospels. The question and answer format allows the reader to follow the arguments in a logical progression, and is a wonderful medium for Olson to showcase his unique talent for keeping the reader interested and engaged while bridging the chasm between academic scholarship and the armchair intellectual. This book should be required reading for every priest, deacon, seminarian, catechist, apologist-anyone who wants to strengthen their Christian faith and deepen their love of Jesus Christ."
- Deacon Harold Burke-Sivers, author, Behold the Man: A Catholic Vision of Male Spirituality

The Kiss of Jesus (Digital)

Jesus and the Dead Sea Scrolls