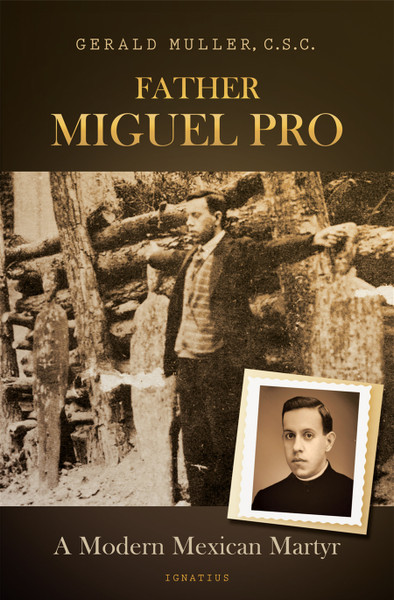 One chilly November morning in 1927, a slender young priest stood before a firing squad in Mexico City. Five shots cracked through the air, and he fell lifeless on the ground. The man was Miguel Agustin Pro, S.J. His crime? Being a Catholic priest.

As a member of the Society of Jesus, Father Pro had worked hard and patiently to bring bread to the poor and the Holy Eucharist to the faithful. Like all Catholic priests in his day, he was deeply hated and viciously hunted by the secret police and the army of the anti-clerical government of Mexico. After Father Pro eluded them many times with disguises and hiding places, when he was finally captured, he was promptly executed without a trial.

Father Pro's generous love for the poor, the young, the sick, the tempted, and the spiritually weak attracted many hearts to him, and through him to Christ. In addition to his charity, his wit and courage make him a model for all Christians, especially those being persecuted for their faith and young people, who are inspired by his heroism.

"'Viva Cristo Rey!' —'Long live Christ the King!' These are the last words of Blessed Miguel Pro as he was martyred, and they are also the words that Father Pro lived by all the days of his life. Read the story of this holy man and gain the strength that he had to live and die for Jesus!"
— Father Larry Richards, Author, Be a Man!

"This book is an inspirational read for our time. Father Pro shows us the joy, the beauty, and the glory of committing one's life to Christ and being faithful to that commitment no matter the cost!"
— Terry Barber, Author, How to Share Your Faith with Anyone

"This wonderfully engaging and inspiring book will stir your heart, motivating you to share your experience of knowing Jesus Christ personally."
— Deacon Harold Burke-Sivers, Author, Behold the Man: A Catholic Vision of Male Spirituality

"The book shows us how Fr. Miguel Pro was a real man, a man of sacrifice—courageous and chivalrous in spades—a heroic priest who understood that the salvation of souls is paramount. It teaches us that, even in times of persecution, the joy of the Lord should be our strength and should permeate our entire being."
— Jesse Romero, Catholic Evangelist and Author; Retired Los Angeles Deputy Sheriff

Father Damien and the Bells

To Be a Father with St. Joseph