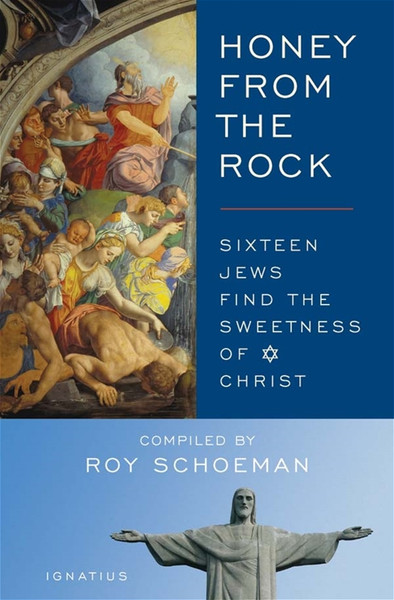 Roy Schoeman, a Jewish convert to Catholicism, and best-selling author of Salvation Is From The Jews, once again shows the clear links between Judaism and Catholicism in these inspiring stories of sixteen Jews who became "fulfilled Jews", as Schoeman says, through their spiritual journeys to the Catholic Church.

The sixteen people whose stories are told here are a variety of Jews, including some who came from secularized, liberal or even atheistic backgrounds, while others came from Orthodox Judaism. Some were well trained Jews, others unschooled in Judaism; some rich and wildly successful, others down and out. But their common link was they all had a profound longing for God that gave them no peace until they found God Himself in the Catholic Church.

Some of these converts are famous people like Edith Stein, Alphonse Ratisbonne, Karl Stern, and Rabbi Zolli, while others are less well known, but all have powerful stories of life-changing spiritual transformations.

Roy Schoeman's work, Honey from the Rock illuminates the essential link between the Jewish faith and Catholicism through the lives of those who were born into the Jewish faith and have come to know the fulfillment of their faith in Christ and His Catholic Church. I recommend Honey from the Rock to anyone who desires to understand the revealed faith of the God of Abraham, Isaac and Jacob, which is fulfilled in Jesus Christ and His Mystical Body, the Church. Honey from the Rock illustrates in a most concrete way the truth expounded so well by Roy Schoeman in his earlier work, Salvation is from the Jews, which I also wholeheartedly recommend.
�Raymond L. Burke, Archbishop of Saint Louis

This book is far more than just another collection of conversion stories. It is a spiritual pathway with each story creating a stepping stone to transformation. These life changing encounters will deepen your faith and provide insights into the riches of the Catholic Church. It is filled with Jewish wit and wisdom and climaxes in the radical transformation of conversion. I highly recommend this book to all who wish to grow deeper and learn about the Faith from a Jewish point of view. You won't be disappointed!
�Brother Bob Fishman - B.S.C.D.

Roy Schoeman has given us all a great gift in showing us the mysterious and wonderful ways in which Y'shua, the Messianic Son of David, and His Mother Miryam continue to speak deeply to the longing hearts of that people to whom, more than all others, we Gentiles owe an incalculable debt.
�Mark Shea, Senior Content Editor, CatholicExchange.com

God's covenant with Israel was neither revoked nor abolished. It was fulfilled in Jesus Christ, and Honey from the Rock is powerful proof of that fulfillment. Israel's prayer and piety, vocation and sacrifice - all are transformed as they are restored. All find their completion in the lives we encounter here. Pope Pius XI put it well when he said that Spiritually we are Semites. May all Catholics be enriched by this movement of the Spirit, because for us it's a movement homeward
�Scott Hahn, author, Rome Sweet Home

This is a gripping book sketching powerfully the Jewish metaphysical restlessness that nothing can satisfy until they taste Honey from the Divine Rock and recognize in Christ the King of the Jews and the Roman Catholic church as fulfillment of Judaism. This book is a constellation made up of sixteen sons and daughters of Israel for whom overwhelming talents, wordly success, money, pleasure brought nothing but despair. Each one of them had its own path; but what is striking is the role played by the Holy Virgin and the holy hunger for the Eucharist in some of the most amazing conversions. This book will bring joy to its readers and rekindle their hope in the power of God's grace at a time when the ship of Holy Church is battered by the waves of secularism, relativism, infidelity and betrayal.
�Alice von Hildebrand

Discovering the love of Christ, coming to believe in Him, as high adventure for any soul. It also makes for fascinating reading as is evidenced in Honey from the Rock, a collection of sixteen brief biographies of Jews who found the sweetness of Christ. These accounts, while expressing gratitude for the Jewish faith, resound with praise for the One who fulfilled all the prophecies and who called each one in inscrutable ways to fullness of life in the Church.
�Thomas J. Olmstead, Bishop of Phoenix

Jesus Christ, Our Lady, the Apostles and most of the first Christians were Jews. But in subsequent generations, a tragic rift developed between Christian and Jew, reaching a bloody crescendo in the Holocaust, and not yet fully healed.
It requires a miracle of grace, then, for Jews today to find their way past all the painful memories and lingering suspicions to discover the truth that a Jewish Pharisee, St. Paul, once preached: "the gospel...is the power of God for salvation to everyone who has faith, to the Jew" as everyone else (Romans 1:16). In this riveting book, we find such a miracle: sixteen startling stories of modern Jewish men and women who encountered Jesus as their Messiah, and have found a home in the Catholic Church
�Paul Thigpen, Ph.D., editor, The Catholic Answer

A Light from the East