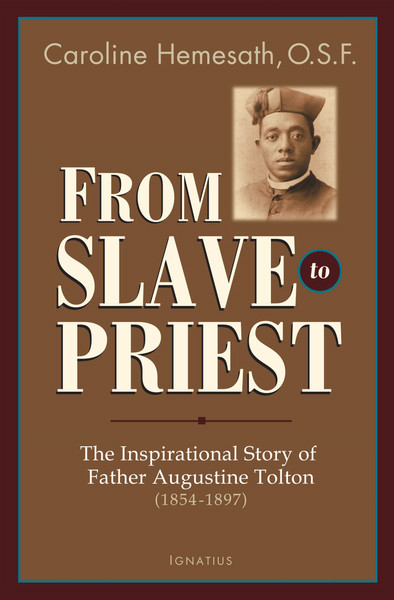 Born into a black Catholic slave family, Fr. Augustine Tolton (1854-1897) conquered almost insurmountable odds to become one of the very first black priests in the United States. By his early death at 43, this pioneer black priest left behind a shining legacy of holy service to God, the Church and his people.

Tolton's cause for canonization has been officially opened by the Archdiocese of Chicago as announced by Cardinal Francis George.

The thorough scholarly research and inspirational writing by Sister Caroline Hemesath on  the great legacy and courage of this former slave who became a priest in the face of incredible prejudice within the Church and society will be a source of strength for modern Christians who also face persecution. In American history, many black people have achieved success against great odds. But Father Tolton faced a different source of prejudice - an opposition from within the Church, the one institution he should have been able to rely on for compassion and support.

He endured many rebuffs, as a janitor spent long hours in the church in prayer, and attended clandestine classes taught by friendly priests and nuns who saw in his eyes a deep love of God and the Church, and a determination to serve his people. Denied theological training in America, his friends helped him to receive his priestly education, and ordination, in Rome. He later became the pastor of St. Monica's Church in Chicago and established a flourishing center at St. Monica's that was the focal point for black Catholics in Chicago for 30 years.

The author interviewed many people who knew Father Tolton personally, including St. Katharine Drexel, and presents a deeply inspiring portrait of a great American Catholic. Book includes illustrations and photographs.

Cause for Canonization of Father Tolton Opened by Chicago Archdiocese
Chicago, Ill., March 3 (CNA) .- Fr. Augustus Tolton, a man born into slavery who became the first American diocesan priest of African descent, is now being considered for canonization. Cardinal Francis George announced on Monday that the nineteenth century priest's cause for sainthood has been introduced in the Archdiocese of Chicago.

"Many Catholics might not ever have heard of Fr. Augustus Tolton; but black Catholics most probably have," the Archbishop of Chicago wrote.

Born in Missouri on April 1, 1854, John Augustine Tolton fled slavery with his mother and two siblings in 1862 by crossing the Mississippi River into Illinois.

"John, boy, you're free. Never forget the goodness of the Lord," Tolton's mother told him after the crossing, according to the website of St. Elizabeth's Church in Chicago.

The young Tolton entered St. Peter's Catholic School with the help of the school's pastor, Fr. Peter McGirr. Fr. McGirr would later baptize him and instruct him for his first Holy Communion. Tolton was serving as an altar boy by the next summer.

The priest asked Tolton if he would like to become a priest, saying it would take twelve years of hard study.

The excited boy then said they should go to church and pray for his success.

After graduating from high school and Quincy College, he began his ecclesiastical studies in Rome because no American seminary would accept him on account of his race.

On April 24, 1886 he was ordained in Rome by Cardinal Lucido Maria Parocchi, who was then the vicar general of Rome. Newspapers throughout the U.S. carried the story.

Fr. Tolton was ordained for the southern Illinois Diocese of Quincy. Upon his return in July 1886, he was greeted at the train station "like a conquering hero," the web site of St. Elizabeth's Parish says.

"Thousands were there to greet him, led by Father McGirr. A brass band played church songs and Negro Spirituals. Thousands of blacks and whites lined the streets to catch a glimpse of the new priest wearing a black Prince Albert and a silk hat.  People marched and cheered his flower-draped four-horse carriage.  Children, priests and sisters left the school joining the procession heading towards the church."

Hundreds waited at the local church where people of all races knelt at the communion rail.

Fr. Tolton served in Quincy before going to Chicago to start a parish for black Catholics. The new church was named for St. Monica and opened in 1893.

On July 9, 1897 Fr. Tolton collapsed during a hot day and died from sunstroke at the age of 43. Cardinal George explained that most priests in the nineteenth century died before their fiftieth birthday.

"Visiting the sick on a daily basis was risky in an age before antibiotics," he explained.

The priest was buried at St. Mary's Cemetery just outside of Quincy, Illinois.

An investigation for canonization will collect evidence of Fr. Tolton's heroic virtues and will investigate claims of his miraculous intercession.

"Few stories are as moving, and as exciting as that of Father Augustine Tolton, who rose from the chains of slavery to become the first recognized Black priest in the United States. The life of this holy hero has inspired me since my childhood, and having this opportunity to reacquaint myself with Father Tolton's virtuous life, has been a true blessing. Sister Caroline Hemesath's biography, first published three decades ago, makes a welcome reappearance this summer, from Ignatius Press. This is a life that for all its accomplishments on behalf of a specific minority, imitates closely the life of our Lord Himself, readily seen in the generosity, the long-suffering, and the never disturbed peace that marked the short, but so eventful years of Father Augustine Tolton. Everyone will be moved by his story, and I especially urge young Catholics to read the book, and learn from Father Tolton, just how much a life can mean, and how much God can accomplish through us, if we are willing."
— Wilton D. Gregory, Archbishop of Atlanta

"From Slave to Priest is an inspiring account of the first Black Priest in the United States. Augustine Tolton was born a slave and perservered against all odds to attain his goal to be a Catholic Priest. While the Civil War ended slavery, it only began the struggle for racial equality. Tolton's fervent vocational commitment was constantly challenged by prejudice, but he also experienced strong support. His brief priestly ministry was marred by prejudice, yet showed the power of God by the acceptance of both black and white faithful. Tolton's perseverance in his vocational commitment is an inspiring lesson for us all."
— Cardinal Justin Rigali, Archbishop of Philadelphia

"...Fr. Tolton is certainly an inspiring example of courage and determination in today's Church, for all of us called to respond to God's vocation to holiness, and especially those called to the priesthood and religious life. I am sure this book will contribute to making known his witness to unwavering fidelity to Christ: a legacy not only for the American Church, but also for all modern Christians, who face persecution for their faith..."
— Cardinal Ivan Dias Prefect, Congregation for the Evangelization of Peoples (Formerly Collegium Propaganda Fide, which educated Fr. Tolton)