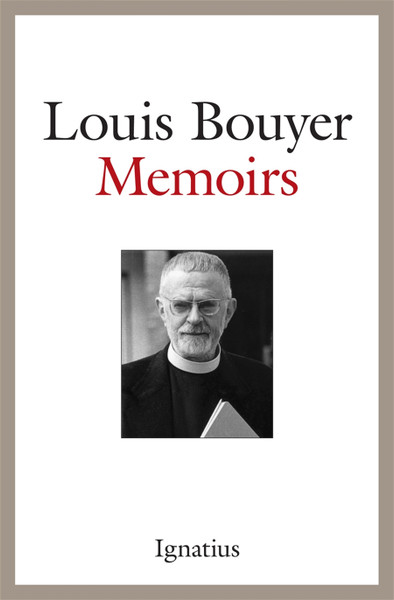 This is the memoir of one of the great theologians and churchmen of the last century. It is difficult to exaggerate Louis Bouyer's contribution to Catholic theology and his behind-the-scenes role in certain, important twentieth-century events in the life of the Church. A French convert from Lutheranism; a priest of the Oratory; an expert on Scripture, liturgy, the history of spirituality, Newman, ecclesiology, and Reformation theology; and a twice-appointed member of the International Theological Commission, Bouyer was a man of immense theological vision and profound depth of knowledge and insight. He was both a major theological contributor to the renewed vision that led to the Second Vatican Council and a staunch critic of its misunderstanding in the decades that followed it.

Bouyer recounts the story of his life and learning-the people, places, events, and ideas that shaped his profoundly Catholic life. He tells of his relationships and encounters with such theological and Church notables as Yves Congar, Jean Danielou, Henri de Lubac, Joseph Ratzinger (later, Pope Benedict XVI), Hans Urs von Balthasar, and Karl Rahner. A disciple of the Lord and a man of great love for the Church, he often writes with parrhesia-pastoral frankness-and wit about the shortcomings of Catholic institutions and life, especially with respect to changes undertaken in the name of reform but which did not truly partake of the sources of the Church's life and mission.

About the writing of his memoir Bouyer said, "In the pages that follow, what I would like to recall is what, on final, or undoubtedly very nearly final, reflection, seems to me to have the most meaning. I hope that those who read them, and especially my friends, both known and unknown (for a writer, are not many of these latter often among the closest?), will also draw some profit from them, perhaps more than I do myself. I hasten to add that the entertainment that these pages could, at least I hope, provide them is an integral part in my eyes of that potential profit. For it is a too-little-known but to me unquestionable fact that Providence has a great and, of course, the best sense of humor!"

"Louis Bouyer was one of the most influential Catholic theologians of the twentieth century. His worked touched on patristics, systematics, spirituality, liturgy, architecture, and the theology of John Henry Newman--and his life was as fascinating and variegated as his writing. This autobiography is spicy, informative, often wickedly funny, and a delight to read."
— Most Reverend Robert Barron, Auxiliary Bishop of Los Angeles

"Fr. Louis Bouyer's extraordinary Christian life was a template of the trials, passions, accomplishments, and unexpected consequences of the Catholic encounter with modernity. His memoirs are required reading for all who would understand the Church's situation in the twenty-first century, especially in Western Europe."
— George Weigel, Distinguished Senior Fellow, Ethics and Public Policy Center