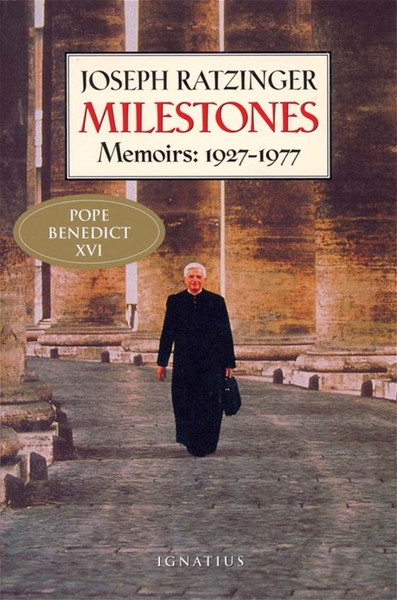 Rich in humor and culture, as well as passion and love for the cause of God and of man, Milestones is the early autobiography of Pope Benedict XVI, Joseph Ratzinger. It tells the fascinating and inspiring story of his early family life, the years under Nazi oppression in Germany, and his part in World War II - including how as a teenager he was forced to join the Hitler Youth and the German army, from which he risked his life to flee.

This book also recounts Joseph Ratzinger's calling and ordination to the priesthood, the intellectual and spiritual formation he received, his early days as a parish priest, his role as an expert at the Second Vatican Council, his experience as a popular university professor and theologian, and his appointment as Archbishop of Munich-Freising in Germany. Joseph Ratzinger would go on to serve for over two decades as the Prefect of the Congregation of the Doctrine of the Faith under John Paul II, before being elected pope himself in 2005.

Written before Benedict XVI became pope, Milestones remains a valuable road map to the man's mind and heart. It dispels the media myths and legends, and it reveals the real Benedict XVI - a man of the Church who loves God and humanity, a scholar, a theologian, a teacher, and a humble pastor with deep compassion and profound spiritual insight. Illustrated.

"Here is Cardinal Ratzinger at his most surprising. Who imagines him a teenager risking his life escaping a Nazi forced-labor camp? Or a doctoral candidate shattered by rejection of his dissertation? Or a priest telling of 'the sufferings necessary for the priestly ministry . . . those dark nights that alone can give full shape to the radical assent a priest must give' Milestones, rich with theological insights as are all his works, gives us finally Ratzinger the person. He is a joy to meet."
-Cardinal John O'Connor

"A very personal, compelling narrative of a life that continues to have inestimable influence in shaping the mission of the Catholic Church. A rare mix of candor and charity, this book is an opportunity to know personally one of the truly great figures of our time. It should not be missed."
-Fr. Richard John Neuhaus, Editor, First Things

"A masterpiece of simplicity and clarity! It tells of the events of a life of inner depth and spiritual passion in the service of the Divine Truth."
-Cardinal Christoph Schönborn, Author, Loving the Church