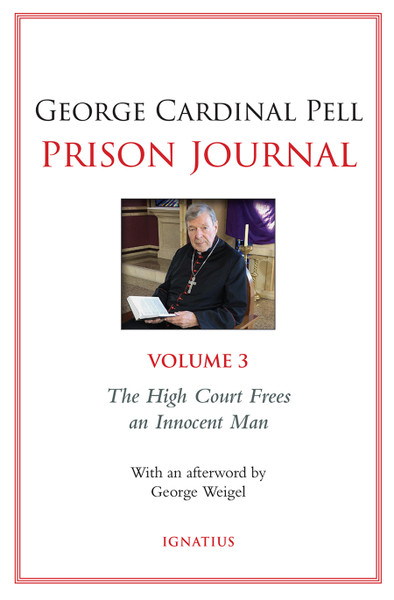 Bearing no ill will toward his accusers, judges, prison workers, journalists, and those harboring and expressing hatred for him, the cardinal used his time in prison as a kind of "extended retreat". He eloquently filled notebook pages with his spiritual insights, prison experiences, and personal reflections on current events both inside and outside the Church, as well as moving prayers.

In this third and final volume, Cardinal Pell’s conviction is overturned by Australia’s High Court, and he is released from prison. As the appeal draws near, he grows in confidence that his case is strong and that his vindication is important not only for his own sake and the Church’s sake, but also for the sake of Australia’s legal system. While continuing his daily readings and devotions, and receiving hundreds of letters with offers of prayers and sacrifices on his behalf, the Cardinal ponders the meaning of suffering in the life of the Christian, and he determines to accept with equanimity whatever outcome lies ahead.

"Cardinal Pell is a superb writer and an articulate witness to an inexcusable abuse of law, but also to the triumph of God's grace. His journal is a marvel."

"Jesus himself, Peter and Paul, Ignatius Loyola, Edmund Campion, Thomas More, Walter Ciszek, . . . Men of towering faith, whose hope was tested in jail. Now we can add to the litany Cardinal George Pell, a confessor of the faith, unjustly jailed but never defeated."

"A window into the soul of a man enduring the crucible of imprisonment, false accusation, loss of reputation. It's astonishing what we see through that window: not bitterness and anger, but graciousness and forgiveness of his enemies. Read this luminous text to see what radical surrender to Christ looks like."