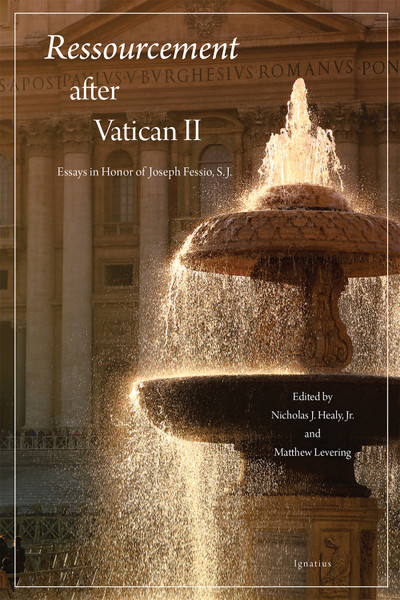 Beginning with a personal recollection of the achievements of Joseph Fessio, S.J., this work includes twelve essays by theologians who acknowledge a debt to Father Fessio and Ignatius Press. The writers treat a variety of topics including teh Church, the liturgy, the interpretation of Scripture, and the development of doctrine, representing the interests of Father Fessio and the books he has published.

The essays touch upon th emajor twentieth-century figures who influenced Father Fessio, such as Hans Urs von Balthasar, Louis Bouyer, Henri de Lubac, Joseph Ratzinger, and Josef Pieper. From its founding by Father Fessio in 1978, Ignatius Press has translated and printed works by these great thinkers and writers in order to make their contributions to the Church available to English-speaking Catholics.

“A collection of essays instructive and stimulating in their own right, a glimpse of the intellectual range and depth of the nouvelle théologie, and a testament to the impact of Ignatius Press and its intrepid and indefatigable founder.”— Fr. Paul Mankowski, S.J., Lumen Christi Institute

“ Ressourcement theology is one of the most fertile currents of Catholic thought in modern times. Ignatius Press, under the guidance of the great Fr. Joseph Fessio, S.J., has been the most important conduit for that thought in the English language. This volume helps us to appreciate the magnitude of their achievement.”— Robert Royal, Ph.D., Author, A Deeper Vision: The Catholic Intellectual Tradition in the Twentieth Century

“ For those who love de Lubac, von Balthasar, and Ratzinger, this work offers original contributions on the subject of their fundamental theology and the ressourcement movement in general. Without Ignatius Press and its founder, Father Fessio, S.J., Anglophone scholars would be even more ignorant of this patrimony than they already are.”— Tracey Rowland, Ph.D., University of Notre Dame (Australia)

“ This delightful volumen is a worthy tribute to Father Fessio’s inestimable contribution to the English-speaking world by making accessible in beautiful and affordable volumes the works of the theological giants Henri de Lubac, Hans Urs von Balthasar, and Joseph Ratzinger. ”— Reinhard Hütter, Professor of Fundamental and Dogmatic Theology, Catholic University of America

An Introduction to Vatican II as an Ongoing Theological Event