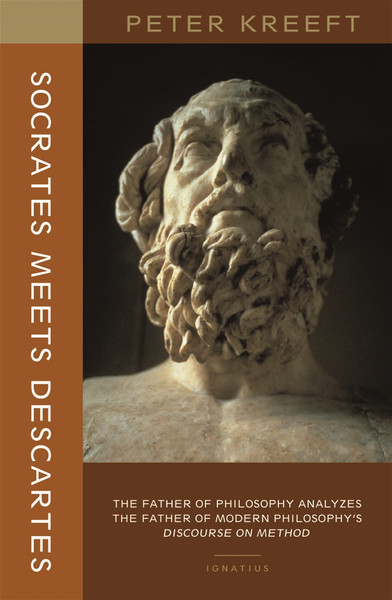 This is the 5th volume in the series of popular volumes by Peter Kreeft, in which the "Father of Philosophy", Socrates, cross-examines various other important philosophers and thinkers (in previous books he examined Marx, Sarte, Machiavelli, and Socrates himself.)
Kreeft states that Socrates and Descartes are perhaps the two most important philosophers who have ever lived, because they are the two who made the most difference to all philosophy after them. These two fathers of philosophy stand at the beginning of the two basic philosophical options: the classical and the modern. Kreeft focuses on seven features that unite these two major philosophers and distinguish them from all others. So this dialog between Socrates and Descartes is a dialog between the fundamental stages in the history of philosophy, the history of consciousness, and the history of Western culture.
Like his other works in this popular series, this book is profound and witty reading that makes for an entertaining and insightful exploration of modern philosophy. It will appeal to both the common reader as well as to those more philosophically inclined.

Wisdom from the Psalms

The World of Saint Paul (Digital)