Told by His Close Friends and Co-Workers 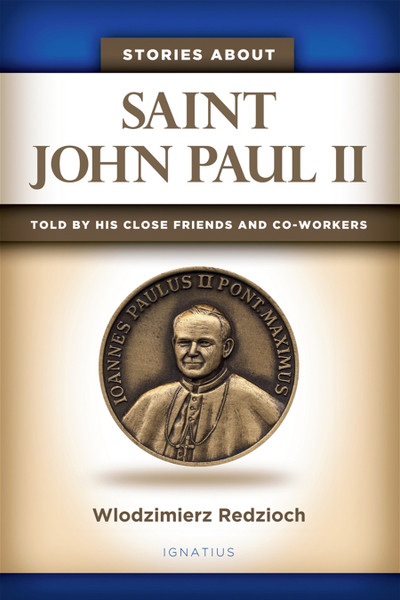 While shaping the history of the Church and the world, Pope John Paul II lived his daily life among individuals who knew him closely as a spiritual father, a colleague, and a friend. They both served and were served by the most influential saint of the twentieth century.

Polish journalist Wlodzimierz Redzioch, a longtime employee of the Vatican newspaper, L'Osservatore Romano, interviewed almost two dozen men and women for this book. Among them are lifelong friends who knew the pope (as Karol Wojtyla) in Kraków and people who cared for him during his pontificate, such as his physician and his secretary. Also here recalling their memories of the pope are some of those who worked beside him inside the Vatican—a papal photographer, a papal spokesman, and curial officials, including the German cardinal who became his successor, Joseph Ratzinger.

All of those interviewed tell remarkable stories about Pope John Paul II—beginning with his courageous witness in Communist Poland and his important participation in the Second Vatican Council, continuing through his election to the papacy and the challenges of his pontificate, and ending with the sufferings of his final years. The process of his beatification and canonization is also discussed.

Through these previously unpublished stories and anecdotes, a composite portrait emerges of a prayerful and thoughtful man with heroic faith, hope, and charity. Capable of discussing, listening, and delegating, John Paul II was also a decisive leader who unabashedly defended the Catholic faith. With his natural flair for friendship and his gifts of joy and humor, he had a tremendous impact on the world because he deeply touched the hearts of countless people everywhere.

"You are going to love this book because these are great stories about a great man. And as Jesus showed us, telling stories is a great way to share the faith."
— Terry Barber, Author, How to Share Your Faith with Anyone

"Saint John Paul II made a huge impact on everyone who was privileged to experience his kindness, joy, devotion, and humble sanctity. In this incredible book, we are given new insights into his legacy."
— Father Donald Calloway, M.I.C., Author, Mary of Nazareth: The Life of Our Lady in Pictures

"Riveting and inspiring from the first page, this book takes you on an intimate walk through the life of John Paul II with those who knew him best. Through his interviews, Redzioch gives us behind-the-scenes glimpses of the heart, the humor, and the holiness of one of our greatest popes."
— Vinny Flynn, Best-selling Author, 7 Secrets of the Eucharist

"Redzioch has gathered stories from many people close to John Paul II that will delight and entertain, inspire and challenge. You will come away from this book with a deeper love for the saint for our times."
— Steve Ray, Film Series Host, The Footprints of God