Odysseus in the Underworld, A Novel 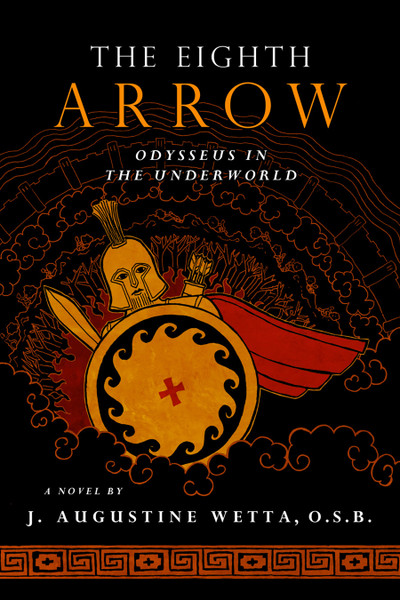 Condemned to burn in the eighth circle of Dante's Hell, Odysseus, legendary thief and liar of Homer's Odyssey and Iliad, decides he is going to break out. His adventure begins with a prayer to Athena Parthenos, who appears to him bearing gifts: his armor, his famous bow, a mysterious leather pouch, and seven unusual arrows. She then sends him on a quest through the Underworld along with Diomedes, his friend from the Trojan War who had been sharing in his eternal punishment. To complete their escape, the goddess warns them, they must recover their squandered honor and learn to use "the eighth arrow".

At turns exciting, humorous, and edifying, this action-packed epic follows Odysseus and Diomedes as they journey through all the circles of Dante's Hell, where they encounter various characters from Greek mythology, ancient history, and Renaissance literature, including Helen of Troy, Cerberus, Penelope, Homer, Harpies, Centaurs, and eventually Satan himself.  With witty banter and wily stratagems, the two Greek warriors fight their way through the obstacles that stand between them and redemption.

The Eighth Arrow is a thoroughly entertaining jailbreak story. Full of allusions to great works of old, it is also gently educational, and as such it can be read as a guide or a companion to Dante's Inferno and the works of Homer.

"Classicists will cheer and new readers will be tantalized by the glories of antiquity as the epic heroes of Greece, condemned to Dante's Inferno, stage the greatest jailbreak in several centuries. And every reader will delight as the wiliest of all Greeks pushes his ingenuity to its limits in Father Augustine's clever, erudite, and engaging intersection of classical epic and fantasy."
— Eleanor Nicholson, Author, A Bloody Habit: A Novel

"If Homer and Dante were alive today and collaborated on a buddy cop movie, the screenplay might read something like The Eighth Arrow. It is thoroughly enjoyable both as an adventure story and as a literary exploration of Dante's setting and Homer's characters."
— Mike Mullin, Author, Surface Tension and the Ashfall trilogy

"Imagine, if you will, a great myth of the classical age, but one written by a Christian. In this unique work of literature—by turns dazzling, witty, profoundly insightful—the author ponders the fate of ancient heroes in the Underworld. Though the name of Christ is not mentioned, the horrors of Hell are real enough, and Odysseus' quest for escape from eternal death is revealed as a purgatorial spiritual odyssey, which in the end shows him that he cannot save himself."
— Michael D. O'Brien, Author, Father Elijah: An Apocalypse

"It takes a very gifted writer to do what Father Wetta has done. He takes two of civilization's greatest storytellers and melds and molds their works into something new and astonishingly fresh. At home with Homer and undaunted by Dante, he leads us through Dante's Hell in the company of Homer's heroes. He does so with an enchanting interweaving of gravitas and levitas, plumbing intellectual depths with a lighthearted and humorous touch. Never has a journey through Hell been this much fun!"
— Joseph Pearce, Editor, The Ignatius Critical Editions series

"Rife with hybrid monsters, this vigorous, eventful, and often comic story is itself a new, hybrid creation springing up from a forceful collision between pagan Greek and Christian cultures. Dreaming in the tradition of MacDonald's Phantastes, Lewis' Narnia books, and Tolkien's The Lord of the Rings, Father Wetta propels a surprising hero into a fantastical landscape that declares to us that things and people are not as they seem but are subject to powers of transformation. That faint noise? The faraway applause of the Inklings."
— Marly Youmans, Author, A Death at the White Camellia Orphanage