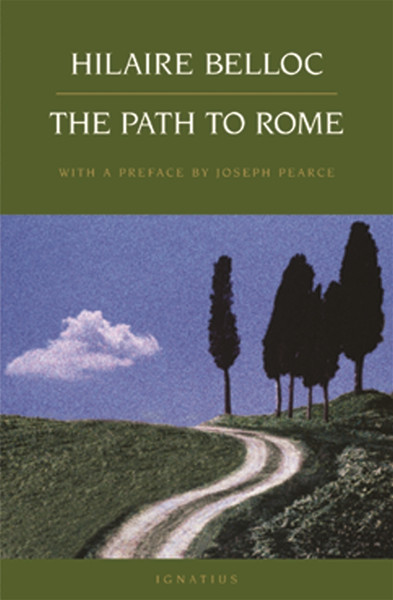 Considered by Belloc himself, and by most critics, his greatest work, this classic book is the delightful story of the pilgrimage Belloc made on foot to Rome in order to fulfill a vow he had made "...and see all Europe which the Christian Faith has saved..." In The Life of Hilaire Belloc, Robert Speaight states: "More than any other book he ever wrote, The Path to Rome made Belloc's name; more than any other, it has been lovingly thumbed and pondered.... The book is a classic, born of something far deeper than the physical experience it records."

"The Path to Rome is the product of the actual and genuine buoyancy and thoughtfulness of a rich intellect.... He will be a lucky man who can escape from that world of freezing folly into the flaming and reverberating folly of The Path to Rome."
-G.K. Chesterton

"The Path to Rome takes the reader on a journey into himself and out of himself, a voyage of discovery in which Home and Exile are interwoven in a mystical dance of contemplation. In its pages we discover the Europe of the Faith which was, and is, the heart of Christendom, and the Faith of Europe which was, and is, the heart of all."
-Joseph Pearce, Author, Old Thunder: A Life of Hilaire Belloc

Hilaire Belloc is one of the most important and versatile authors of the 20th century. A social commentator and a master of finely crafted prose, he wrote numerous books on social, historical and theological topics.

The Primacy of the Church of Rome