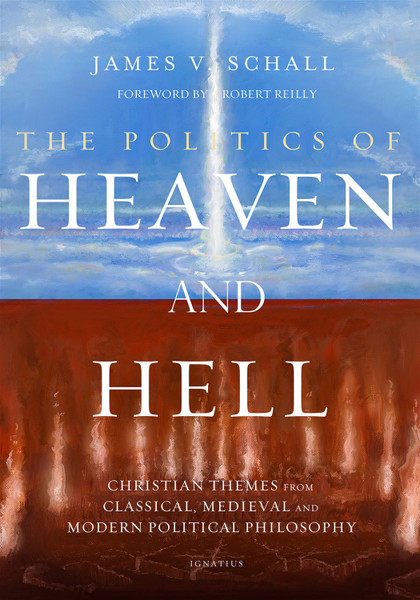 The Politics of Heaven and Hell makes an invaluable contribution to the understanding of classical, medieval, and modern political philosophy, while explaining the profound problem with modernity.

Christianity "freed men from the overwhelming burden of ever thinking that their salvation will ultimately come from the political order", writes Fr. James Schall, S.J. Modernity, on the other hand, is a perversion of Christianity, which tries to achieve man's salvation in this world. It does this by politicizing everything, which results in the absolute state: "The distance from the City of God to the Leviathan is not at all far once the City of God is relocated on earth."

The best defense against this tyranny is "the adequate description of the highest things, of what is beyond politics". Both reason and revelation are needed for this work, and they are eloquently and ably set forth in this book.

"Rich and dense with meaning, this book has enduring value because it touches upon perennial issues, the fundamentals of human existence at any time, in any place. Because Father Schall was one of the great diagnosticians of the disorder in the modern soul, it has an urgent contemporary relevance."—Robert Reilly, from the Foreword; Author, America on Trial

"Father Schall was a distinguished political philosopher whose immersion in the classics of the past gave him keen insights into the present and future. Students at Georgetown used to say that they 'majored in Schall'. America would do well to 'major in Schall' today."— George Weigel, Author, The Fragility of OrderandThe Next Pope

"This is an essential text that puts back into play crucial ideas that have for too long been missing— with disastrous consequences for both our personal and public lives."—Robert Royal, Ph.D., President, Faith and Reason Institute

"A minor classic of political philosophy—or perhaps, to be bold (and to note the immense effect it had on me), simply a classic. As a guide into the depths of political philosophy, especially for Catholics, there is no more sure-footed and sagacoius guide than Father Schall."—Benjamin Wiker, Ph.D., Professor of Political Science, Fransciscan University

"To have any work from the late, great Father James Schall brought back into print is most welcome. For political philosophy to be its theme is most timely. We need Father Schall's wisdom on that subject now more than ever."—Edward Feser, Ph.D., Professor of Philosophy, Pasadena City College; Author, Five Proofs for the Existence of God

"Schall's book reminds us of the balanced riches of classical and medieval sources of Christian political thought. Anyone interested in the survival of the West in the twenty-first century should read this book."— Jay W. Richards, Ph.D., Research Assistant Professor, Busch School of Business, Catholic University of America

"Father Schall, with charactersitic faith, reason, wisdom, and wit, alerts us to the real possibilities and limits of nations and states, so that we may prepare for heaven while avoiding making hell on earth."— Robert McTeigue, S.J., Author, Real Philosophy

Miracles from Heaven/ Heaven is Real