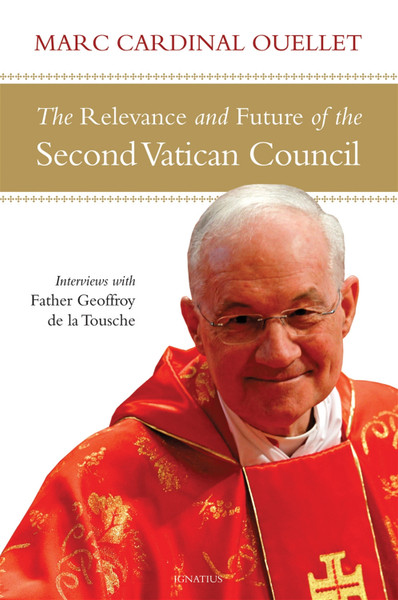 Fifty years after the opening of the Second Vatican Council, Cardinal Marc Ouellet-considered by many to have been a top candidate to succeed Pope Benedict XVI-gives his thoughts on the Council and what the Vatican II means for us today. In interviews with French priest Fr. Geoffroy de la Tousche, Cardinal Ouellet speaks both personally and professionally about the state of the Church since the Council, explaining what went wrong-and right-in the implementation of the Council's teachings.

Ouellet discusses his own life, including his childhood in post-colonial Quebec, the search for meaning leading to his personal encounter with Christ, his vocation to the priesthood, being a professor in Latin America and Rome, and his more recent positions as archbishop of Quebec, prefect of the Congregation for Bishops, and president of the Pontifical Commission for Latin America. Drawing on his experience as both a formator of priests and a professor at the John Paul II Institute for the Family, Ouellet speaks of the significance of married love, the meaning of consecrated life, and the spousal nature of the priesthood. He illuminates these realities with the teachings of the Council. Among other topics, the Cardinal discusses his acquaintance with popes John Paul II and Benedict XVI, his experience on the Pontifical Council for Christian Unity, and his admiration for the youth today.

The interview continues with questions about the Council's four Constitutions and the Council in general, leading to a discussion of a wide range of topics including liturgy, ecumenism, evangelization, the work of the laity, new movements and communities, vocations, celibacy, human dignity, war and justice, ecology, sin, and the Eucharist. Moving with clarity and ease between theological realities and personal impressions, Cardinal Ouellet discusses the state of the Church today with points that are challenging, edifying, and full of hope.

Cardinal Marc Ouellet is the prefect of the Congregation for Bishops and also president of the Pontifical Commission for Latin America. He was ordained in 1968 and is a priest of the Society of Saint-Suplice. After serving over 20 years as a university and seminary professor, he was appointed Archbishop of Quebec in 2002 and created cardinal by Pope John Paul II.

Fr. Geoffroy de la Tousche was ordained in 1998 and is a priest of the Diocese of Rouen, France. In 2002, he completed a doctorate in dogmatic theology at the Pontifical Gregorian University on the subject of bishops as addressed in the Vatican II Constitution Lumen Gentium.